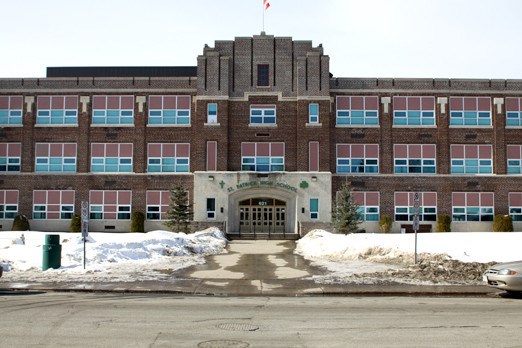 About 24 students wore a piece of green tape with the word “choice” written on it on their regular school uniform in response to an annual pro-life event, which had a group of students take a one-day vow of silence and wear red tape with “life” written on it.

Grade 10 student Alexandria Szeglet started the green tape trend before being sent home for refusing to remove the tape from her uniform. Another five to seven students were sent home for the day or issued a two-day suspension.

“That was my number one concern as soon as I found out about this,” said Calnan, who graduated from the high school in 2009 and is now a student at Lakehead University.

The Silent Solidarity event raises money for the group to attend right-to-life events and also for the group’s Project Mommy, which collects supplies to make care packages for the school’s young mothers.

Calnan said she heard from several students that some of the pro-choice students weren’t respectfully debating the issue, but using profanity against pro-life students. She also learned that the school chaplain was allegedly mocked by a couple of students participating in the pro-choice demonstration.

Calnan said opposition doesn’t faze her because as a pro-life supporter she said she faces it on a regular basis. But she added that she wants the current St. Pat’s pro-life group to stay strong despite the recent controversy.

“They were totally within their right to be expressing their opinion and raising funds for their projects,” she said of the pro-life student group. “They had the administration’s approval months in advance…they went through all of the right procedures.”

De Faveri said the students who expressed opposing views to the event are allowed to do so, but hadn’t gone through the proper channels to have the alteration to their uniforms approved.

The students who chose not to comply were in violation of the school’s code of conduct.
In this case, a couple of the students openly swore at a teacher and the others’ behaviour is defined as opposition to authority, De Faveri said.

“It was whatever would have happened under any other circumstance where a student’s swearing at one of our teachers or not comply with the requests with someone who is in a position of authority at the school,” he said.

Fifteen-year-old Brittney Cloutier was issued a two-day suspension for not removing the green tape and said she did it because she wanted to prove her point.

“I saw Alex giving out tape in the hall. I thought it was a good idea because something bad could happen so I do believe a woman does have a choice to get an abortion or not,” she said, adding she felt it was unfair for the pro-life students to have a voice while pro-choice students were expected to remain absent from the issue.

De Faveri couldn’t say whether or not the green-tape initiative would have been approved had it gone through the same process as the Day for Silent Solidarity. He said he does want students to know that the process is there for any events they want to organize.