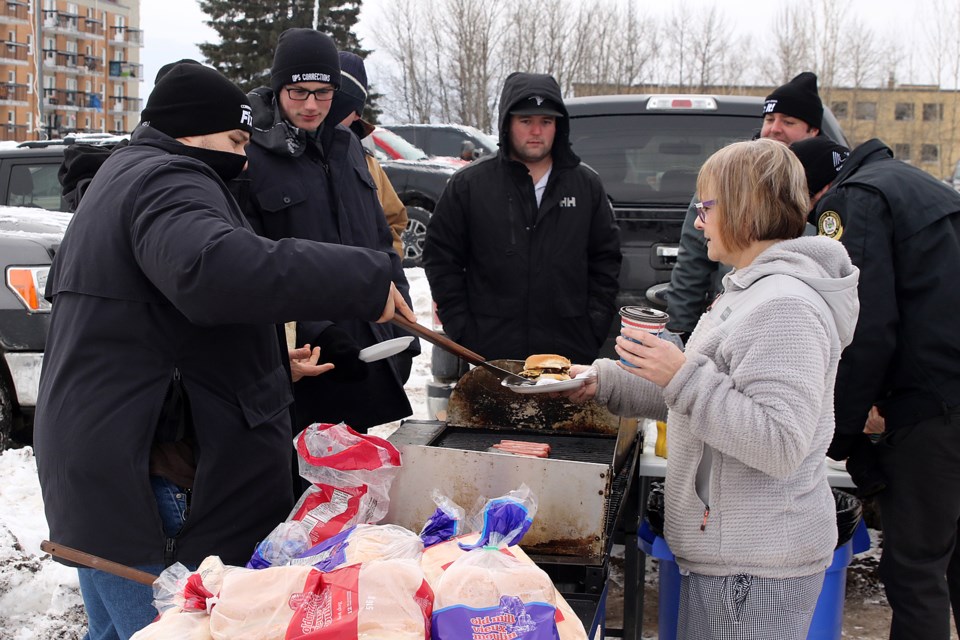 Correctional officers from the Thunder Bay District Jail and the Thunder Bay Correctional Centre rallied on Friday, Dec. 8, 2017, raising concerns about a lack of safety on the job, two years after a riot saw prisioners take over the jail. (Leith Dunick, tbnewswatch.com).

THUNDER BAY – Two years after a riot that saw correctional officers taken hostage at the Thunder Bay District Jail, the guards who remain say they feel forgotten by the provincial government.

Brad Slobodian, the acting president of OPSEU local 737 and a 14-year veteran at the soon-to-be-replaced District Jail, says little has changed in the ensuring 24 months to facilitate safety for staff and inmates.

Other than changing doors inside the facility to open inward instead of outward, it’s the status quo at the crumbling 91-year-old jail.

“The health and safety aspects in there, it’s still bad in there as far as that goes,” Slobodian said. “We still don’t have sally ports in place that we should have had in place. We’re still waiting on those. Staff is frustrated. Our management is frustrated. We feel forgotten.

“They’ve shown basic apathy toward us these past two years.”

A sally port is a secure double-door entryway that allows the safe passage of inmates and an added layer of protection for correctional officers.

The province has promised to install them at the jail, but work has yet to get under way. It’s scheduled to start in 2018.

“It’s been two years and we’re still working under the same conditions.”

A total of five inmates were charged as a result of the riot, which caused $132,000 worth of damage to the district jail.

Sally ports had been requested while he was still working there.

It’s frustrating to watch said Coons, who retired a decade ago and joined a noon-hour rally on Friday in on the District Jail property.

“There were issues when I was a senior manager that we dealt with the in ‘90s and the 2000s and it just seems they have to continue to fight for an adequate staffing level to sally ports in the cell-block area to make safety a little bit better than it currently is,” Coons said.

“It’s extremely frustrating that even though you had a serious incident two years ago, plus other things that go on, that the government has basically not responded to a request to make the workplace safer – and safer for offenders also.”

Shawn Bradshaw, who leads the union at the Thunder Bay Correctional Centre, which will be merged into the new jail, said the province has also dropped the ball when it comes to body scanners that have been installed at the jail and now at his workplace.

Instead of allowing them to screen inmates already housed at the two facilities, the province only allowed guards to use them on new inmates or those who left to attend court or other appointments, and visitors.

Bradshaw is not surprised, adding it's a waste of millions of taxpayer dollars.

“It’s frustrating, but you get used to the circus. But we’re far from isolated in that. Every institution has major issues, but it seems that nobody really cares until something really bad happens. Then they only care as long as there’s attention on it,” he said.

The replacement facility is currently in the planning stage, with no set timeline to open.