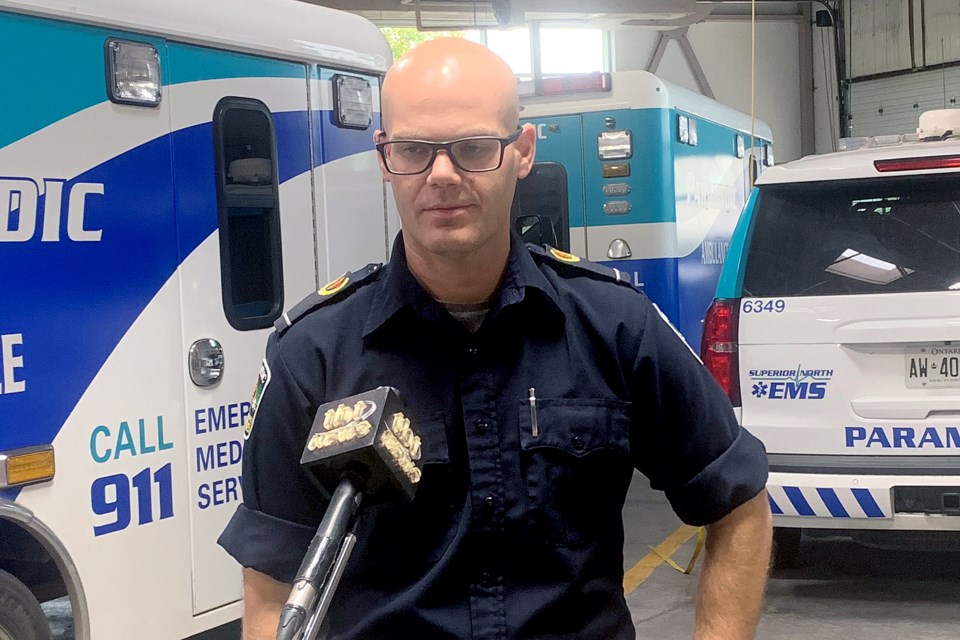 THUNDER BAY – On average, Superior EMS paramedics have 183 school-age youth referred to them for COVID-19 tests each day.

The calls are coming so fast and so furious, it’s crashed their phone system.

Each student who requires testing must stay home until they receive a negative test result and at one point last week, there was a backlog of 617 awaiting tests.

To clear some of the backlog, paramedics are staging multiple drive-through testing clinics, specifically for school-age clients, symptomatic or those who have been referred.

The first will be held on Thursday night at the Boys and Girls Club of Thunder Bay, while on Saturday and possibly Sunday they’ll take over the driveway outside the Thunder Bay Community Auditorium. Only those who have been referred for a test will be called for an appointment.

The goals is to clear as much of the backlog as possible and get as many kids back in the classroom as possible.

Shane Muir, who heads Superior North EMS’ COVID-19 task force, on Tuesday said paramedics will also be out on the road doing home-visit models for those who have transportation and mobility issues.

“Initially we had a capacity of about 20 (tests) a day, but we’ve boosted that up and we’re seeing about 180 referrals for symptomatic children. And that’s on a continuous basis,” Muir said.

“It seems to be coming in every day. We’re trying to adjust to that and the way we’re adjusting is getting more people in through drive throughs and giving people more models where they can come to us so we don’t have to spend that time transporting and using vehicles to get to people. We can see a higher volume in a shorter period of time.”

Muir added they have managed to cut the backlog significantly, but since it’s an ongoing issue, it’s best to clear it altogether to stay on top of the problem, which he fears is only going to get worse as case numbers continue to grow elsewhere in Ontario.

Students have only been back in the classroom for three weeks. There’s already been one confirmed case, a student at Ecole Gron Morgan Public School.

“As far as anticipating (more cases in school), I don’t know, but we are planning for it. We are expecting to see increased volume. I think they’re trying to do some system level things on the other side to reduce those kind of volumes coming to us.”

Across the province there are 21 outbreaks in schools and child-care centres and on Monday Ontario reported a record-high 700 new COVID-19 cases.

The province has already moved away from allowing anyone who wanted a test to get one, focusing instead on the most vulnerable. Families are also able to download a form from Ontario Public Health that families can fill in when sending a child back to class after experiencing symptoms not related to COVID-19. Many school boards require a negative COVID-19 test, something public health officials advise against, in part because of the testing backlog.

Ontario, which is now in its second wave, is testing between 41,000 and 43,000 people per day, more than four times the rate at the height of the first wave.