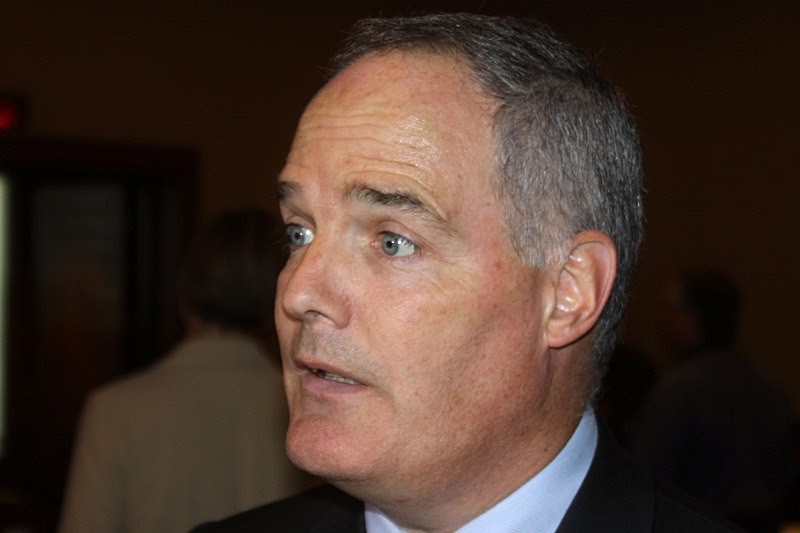 François Lecavalier of SNC-Lavalin is optimistic a solution can be reached to bring the proposed Ring of Fire development to fruition. Lecavalier was in Thunder Bay to speak at the fourth annual Prosperity Northwest event at the Valhalla Inn on Wednesday. (Matt Vis, tbnewswatch.com)

The event, a one-day forum and trade show, was hosted by the Thunder Bay Chamber of Commerce at the Valhalla Inn Wednesday and featured speeches from business executives as well as a collection of business exhibits.

François Lecavalier, vice-president of acquisitions and partnerships in the mining and metallurgy department of Montreal-based SNC-Lavalin, was one of the invited speakers. Lecavalier addressed the divisive Ring of Fire development and stressed the need for all parties to be operating on the same page.

“The Ring of Fire has the potential to help economic growth in Canada and Ontario over the next decades, but it won’t happen if there isn’t the necessary infrastructure to get the resources out,"  Lecavalier said prior to his presentation.

"This will only happen if there is real partnership between the mining companies, both levels of government and the First Nations communities.

“Essentially we are at the beginning. It’s a negotiation. In a negotiation people take positions in the early days of the discussion that you know they are going to move from, and I am confident that with time there will be a solution. The potential is there for this to have a very positive impact on all of the communities in Northwestern Ontario.”

Lecavalier added that both the mining companies and government need to realize that each side needs the co-operation of their counterpart, and it will be a mutually beneficial relationship once the project gets underway.

The mining industry was not the only point of emphasis as David Lindsay, president of the Forest Products of Association of Canada, also addressed the assembled audience.

Lindsay reported that the forestry sector is back on the rise after a rough few years which were particularly painful in the region.

“We’ve done a number of studies on what the new opportunities are in the forest industry. We are estimating that we’re going to need 60,000 additional employees between now and 2020,” Lindsay said, and added that there are currently 230,000 workers directly involved in the forestry sector, 40,000 of which are approaching retirement.

“We’re looking at additional products and additional markets, so $20 billion in economic activity around the world.

Lindsay cited the purchase of the Terrace Bay pulp mill by Indian company Aditya Birla to convert the mill to a rayon fibre production facility as an example of how the forestry industry is adapting.

Charla Robinson, president of the Thunder Bay Chamber of Commerce, explained that one of the primary functions of the gathering, which attracted over 75 local business exhibits, is to serve as a networking meeting and to build bridges between different industries.

“The mining opportunities are quite exciting,” Robinson said. “If you open a mine you need a lot of services. You need services such as feeing your employees, you need things like housekeeping and basic uniforms. It’s not just about being in a mine, it’s about all of the other services and opportunities that offers to the business community.”