THUNDER BAY – More than than twice as many local homes having high radon levels compared to the Ontario average.
Nov 30, 2015 11:47 AM By: TbNewsWatch.com Staff 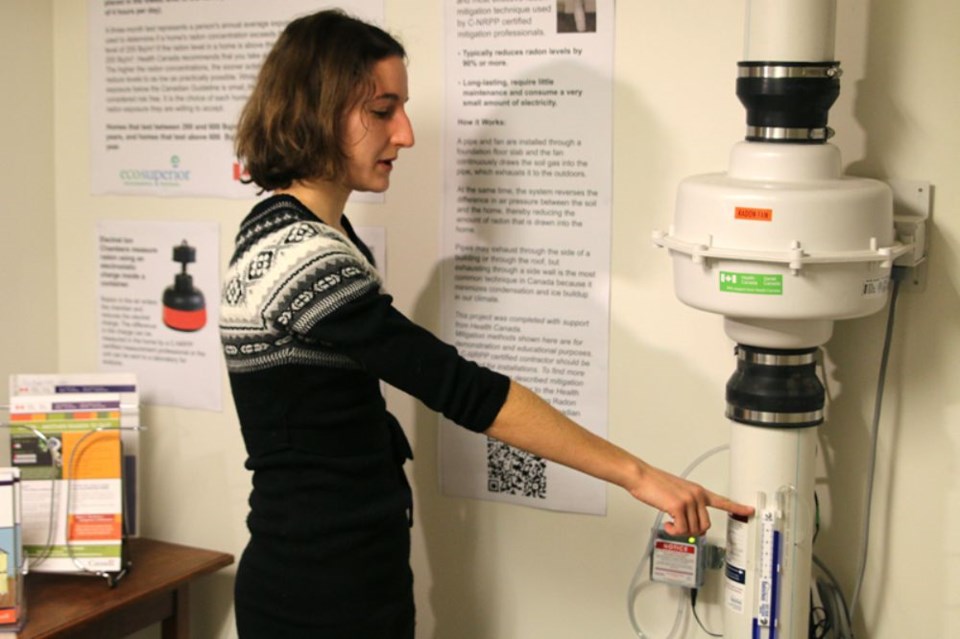 THUNDER BAY – More than than twice as many local homes having high radon levels compared to the Ontario average.

To educate homeowners on how to mitigate levels of the gas, which is the second leading cause of lung cancer in Canada and is responsible for 16 per cent of lung cancer deaths, EcoSuperior officially opened their radon demonstration area, which is located in the basement of their Red River Road headquarters.

Program coordinator Caroline Cox said the demonstration area is about visually showing people what to do if they have high radon levels.

“We’re launching this area and it’s a resource about testing for radon and also for fixing your home if you have high levels,” she said on Monday. “We have various techniques about testing and mitigation on display.”

A study conducted in 2014 showed there were 43 per cent of homes in the McIntyre ward and 30 per cent in the Neebing ward that had radon levels above Health Canada’s acceptable recognized level of 200 becquerels per cubic metre.

Radon can enter a home through an opening where the foundation comes into contact with soil.

EcoSuperior sells testing kits to detect the gas. Though radon is hazardous to health, it doesn’t pose an immediate danger such as carbon monoxide.

“You can’t taste it, smell it or see it. You have to test to know if you have it. For a homeowner, the most practical thing to do is this long-term, 90-day to one-year test,” she said.

“Long-term exposure is what causes health problems, so that’s why we can do a long-term test.”

If a home is found to have high radon levels, there are a number of solutions ranging in cost from $500 to about $3,000.