Elementary teachers to walk out twice next week

Locally teachers will be on the picket line next Wednesday and Thursday if a deal isn't reached by Friday.
Jan 28, 2020 9:07 AM By: Leith Dunick 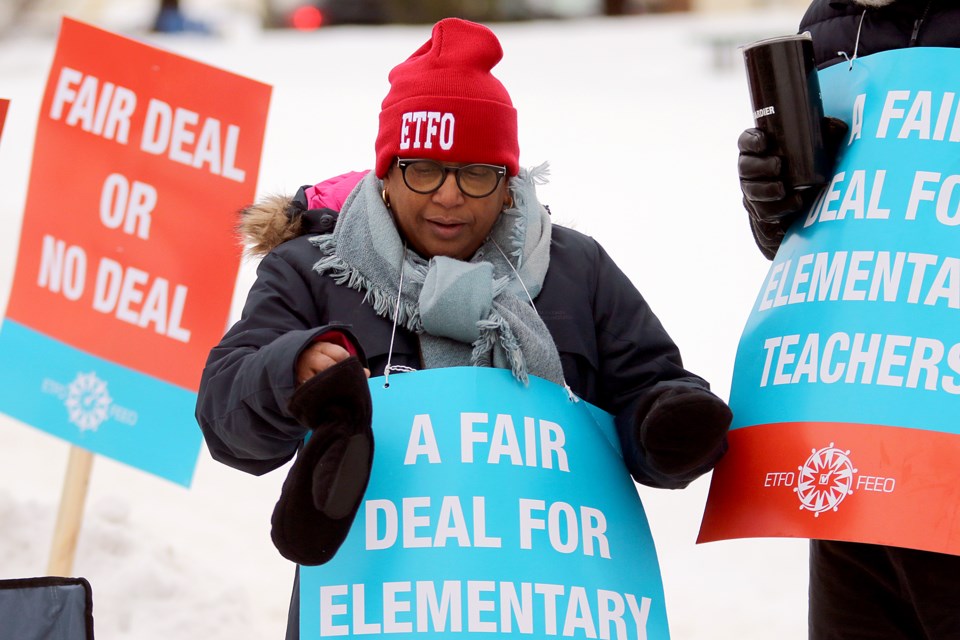 THUNDER Bay – The province’s public board elementary teachers may have been one of the last of the teachers’ unions to hit the picket line.

But they’re leading the pack when it comes to ramping up their job action.

On Monday the Elementary Teachers’ Federation of Ontario announced it would scale up their picketing, starting on Feb. 3, if Minister of Education Stephen Lecce doesn’t come back to the bargaining table and reach an agreement by Friday.

The union will start staging rotating strikes on Monday, with teachers at Lakehead Public Schools and Keewatin-Patricia scheduled to walk out next Wednesday.

A one-day province-wide strike involving all 83,000 union members would follow on Thursday, with a return to rotating strikes on Feb. 7.

“There is nothing to be gained by Minister Lecce avoiding meaningful and fair contract talks other than further damaging the reputation of the Ford government,” said ETFO president Sam Hammond in a release.

“Educators and parents are not going to accept the government’s deep cuts to public education that only serve to harm the quality of education for generations to come.”

“I challenge the minister to send his negotiators back to the table to address these issues because in four months of talks from August through December 2019, his negotiators had no mandate to discuss them,” Hammond said.

Lecce responded on Monday by saying teachers are breaking their promise to parents by withdrawing services province-wide next week, forcing them to scramble to find child care on short notice.

“Repeated escalation at the expense of our students, to advance higher compensation, higher wages, and even more generous benefits, is unacceptable for parents and students in our province. We firmly believe students should be in class, which is why we continue to stand ready to negotiate to reach a deal Ontario students deserve,” Lecce said in a statement.

Thunder Bay doctor wins College of Physicians and Surgeons award
Sep 23, 2020 11:56 AM
Comments
We welcome your feedback and encourage you to share your thoughts. We ask that you be respectful of others and their points of view, refrain from personal attacks and stay on topic. To learn about our commenting policies and how we moderate, please read our Community Guidelines.
The latest on COVID-19 Local and global updates →