The fire threatened a nearby building and wood supply and was difficult to extinguish due to large amounts of fuel and hydraulic fluid.
Jun 29, 2020 12:42 PM By: TbNewsWatch.com Staff 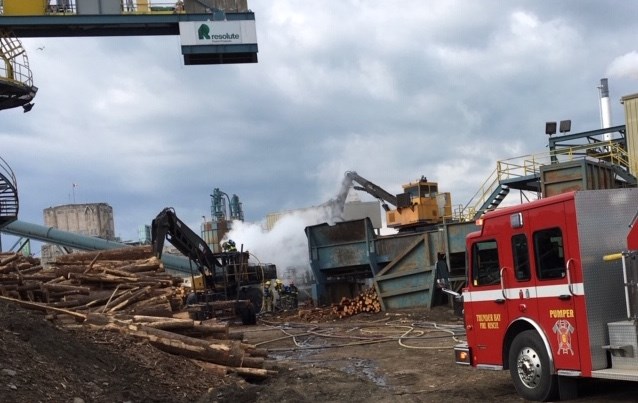 THUNDER BAY - A difficult equipment fire has been extinguished at the Resolute Forest Products Saw Mill, which threatened a nearby wood supply.

Thunder Bay Fire Rescue received reports of a large loader on fire near the main building at the Resolute Saw Mill Monday morning just after 9 a.m.

The log loader was fully engulfed in flames when crews arrived on the scene and was located only 14 metres from the main saw mill building.

The operator of the log loader was able to self-evacuate before the fire spread further and was uninjured.

Fire crews began an attack on the fire with hand lines to prevent it from spreading to the nearby building and a large wood supply located nearby.

Due to the large amount and fuel and hydraulic fuel, the fire proved to be difficult to extinguish. With the arrival of more crews, the fire was brought under control by a foam extinguishing agent.

Three pumper trucks and a command unit respond to the fire. The cause of the fire is believed to be the result of mechanical overheating in the engine compartment of the loader.