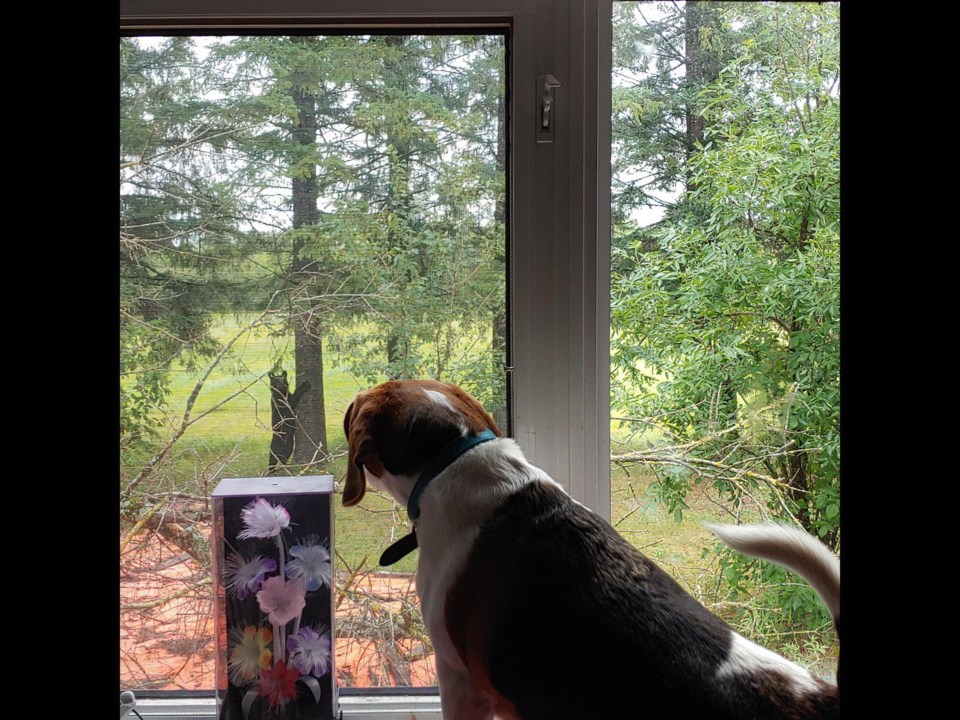 Dexter the beagle is looking at a bear clinging to a tree. Dexter saved Jennifer, his owner, from an attack by this bear when she was doing a garbage run. [Photo © Jennifer Stokya] Merna Emara, Local Journalism Initiative Reporter/Fort Frances Times

Jennifer Stokya was visiting her mother in Arbor Vitae, north west of Fort Frances, when she was confronted by a bear in her backyard during a garbage run. Stokya said she lives in B.C. and just came down to visit her mother and help her with house chores.

“I stepped on the door step with full hands and fighting with trying to close the door behind me, I turned my back without looking up,” Stokya said. “Suddenly there was a loud hissing noise and a large paw whizzed past my head and it was a bear on his hind legs swiping at me.”

Stokya said she was trying to keep her dog, Dexter, from getting out the door. Although Stokya said Dexter is professionally trained to be off leash, he had been acting strange for several days and randomly growling at trees.

“Little did we know,” Stokya chuckled. “His swipe missed me and hit the garbage bag. He actually had me cornered, but thankfully the door hadn’t yet closed all the way, and Dexter pushed his way through the door and leapt into the air at the bear and successfully chased the bear up a tree about 20 feet away.”

Stokya said even while being chased by Dexter, the bear still managed to grab the garbage bag and a random loose coffee pod that had fallen out before running up the tree.

This is the season when bear sightings are most common. They are looking for food to add an extra layer of warmth before hibernating in the winter.

After calling the Ministry of Natural Resources, Stokya said they advised her to watch for the bear to come down and make noises to scare it away and make it feel unwelcome. However, the same bear came back wandering around the yard again.

“My mom spotted him first,” Stokya said. “She yelled and made noise and it didn’t even look at her. I came out and started yelling too and it at least momentarily stopped and looked at me and sniffed the air a little, recognizing me I guess. It wasn’t until my dog started growling and barking that the bear slowly ran off. I haven’t seen the bear since, but occasionally can smell that he is in the area.”

Stokya said a neighbour stopped by to warn them that he had spotted the bear behind the house when he he was driving by, so it’s still around.

“The next day the bear was back. But definitely not scared of us. I haven’t seen the bear, but definitely randomly could smell him so knew he was close by,” Stokya said.

“I was pretty shaken up for quite some time after, thinking of the close call, and how the whole situation would have been a lot different if I didn’t have my dog with me.”

Dexter’s treat for rescuing Stokya was steak for supper.