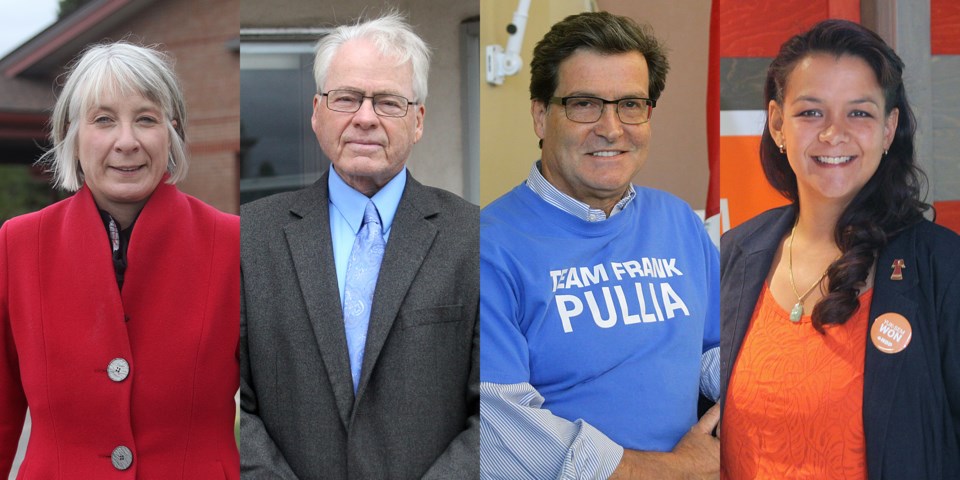 THUNDER BAY – With just under six weeks until Canadians head to the ballot box to elect the next federal government, local candidates are ready to hit the ground running.

The writ for the 43rd federal election was formally drawn up on Wednesday, opening a 40-day campaign for party leaders and candidates to make their case to earn support from voters across the country.

“The focus is going to have to be on needs versus wants, not just here but across Canada. People are looking for change from the Liberal government,” Pullia said, adding that the SNC-Lavalin scandal that plagued Liberal leader Justin Trudeau and resulted in the exiling of former cabinet ministers Jody Wilson-Raybould and Jane Philpott to run as independents has been front and centre when he has been going door to door.

“What I’m hearing is many people are disappointed. Their expectations were very high and they have not been fulfilled.”

Hajdu disagreed when asked about how often constituents raise the SNC-Lavalin matter, saying it’s rarely brought up in discussion. Instead, she said the environment has been an emergent topic during this campaign compared to 2015 and believes people want to make sure northern Ontario has a strong voice.

“This work we’ve been doing to grow the middle class, the efforts we’ve been making to ensure families have better resources to raise their children, that we have stronger benefits for seniors, those things are starting to pay off,” Hajdu said.

“I think there’s a recognition that Canadians would like to see us do more.”

The governing Liberals held 177 seats at the dissolution of Parliament, narrowly above the 170 required to form a majority government. The Conservatives, with 95 seats, formed the Official Opposition. The NDP were third with 40 seats. The Bloc Quebecois and Green Party, with 10 and two seats respectively, fell short of official party status. The People’s Party of Canada and the Co-operative Commonwealth each held one seat after floor crossings while eight MPs sat independently and four seats were vacant.

Hyer, who was previously elected twice in the riding as a member of the NDP in 2008 and 2011, predicted a Liberal minority government when the dust settles.

“Just imagine if Thunder Bay-Superior North held the balance of power. It could happen,” Hyer said. “It’s very clear there is a Green wave happening across Canada. We’ve seen this happen before with the NDP under Jack Layton. I think the Green votes will be going up. We may get official party status.”

Achneepineskum said she has heard concerns about housing, employment sustainability, climate change and health care when meeting with people in her riding over the last few weeks.

“It’s very important that I maintain that communication and connection with the people in this riding,” Achneepineskum said. “I’m very grateful I have this opportunity to care on the work and vision of the NDP because it’s part of the concerns of the people in the riding.”

Youssef Khanjari is running for the People's Party.

In Thunder Bay-Rainy River, where incumbent Liberal MP Don Rusnak is not seeking re-election, physician Marcus Powlowski will be vying to keep the riding red against a field of all first-time federal candidates on the ballot.

“I think it really does show there is an opportunity for change,” NDP candidate Yuk-Sem Won said.

“What northern Ontario really knows is that the NDP with (former MP) John Rafferty here really brought a strong voice. I’m looking to continue on that legacy. Whether or not the seat has an incumbent, I think is inconsequential to the hard work that we’ve done over the years for the constituents and with the NDP.”

Conservative candidate Linda Rydholm, a Thunder Bay city councillor in the Neebing ward for five terms, said she believes there needs to be better leadership and is worried about the fiscal state of the country.

“I don’t think that the current government deserves another four years to misspend our money and to give low, very low, punishment for crimes that are being done,” Rydholm said.

“We need a change. We need a better government, a better national representative for our country.”

The Greens will be represented by previous provincial candidate Amanda Moddejonge and Rainy River councillor Andrew Hartnell will be on the ballot for the People's Party.

The federal election will be held on Oct. 21.