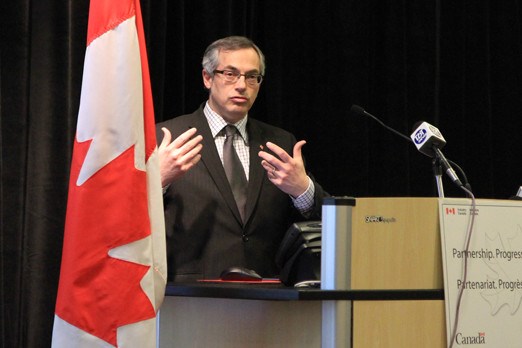 A pair of local research projects got a financial boost Monday from the federal government.

FedNor Minister Tony Clement announced about $700,000 at the Thunder Bay Regional Health Sciences Centre for two research projects Monday. The first funding announcement revolves around a medical imaging device that will allow surgeons to scan breast tumour tissue that has been removed to ensure all the cancerous tissue was removed.

Tornado Medical Systems Inc. will receive a loan of $363,348 to develop a prototype of the device. CEO Stefan Larson said instead of sending the tissue to a lab, the device will be in the operating room and surgeons will have the results in 10 minutes or less.

The device will also give surgeons more accurate results than they currently rely on.

“When we come in and tell them in that same 10 or 20 minutes we can actually give you an answer that’s going to give you clinically relevant information and allow you to make a better clinical decision, they get very excited about that,” said Larson.

Clement said the project will not only be helpful for Canadian breast cancer patients, but it will have worldwide applications.

“It’s great to see this innovation come out of Thunder Bay,” he said. “I’m looking forward to the final product.”

While it will have medical applications, it will also be helpful to law enforcement agencies.

“It has some investigative applications for the making sure we can catch the bad guys,” said Clement.

Clement also reaffirmed the $4 million outlined in the 2011 federal budget for the Thunder Bay Regional Research Institute’s cyclotron project will soon be flowing and the three projects together show that Thunder Bay continues to develop as a hub for translating research and development projects into marketable products.

“They are going to make patients’ lives easier. They open up global opportunities for commercialization and markets for Thunder Bay companies,” he said.

“It really is a further example of the diversification of the Thunder Bay economy that FedNor has been supporting over a number of years.”