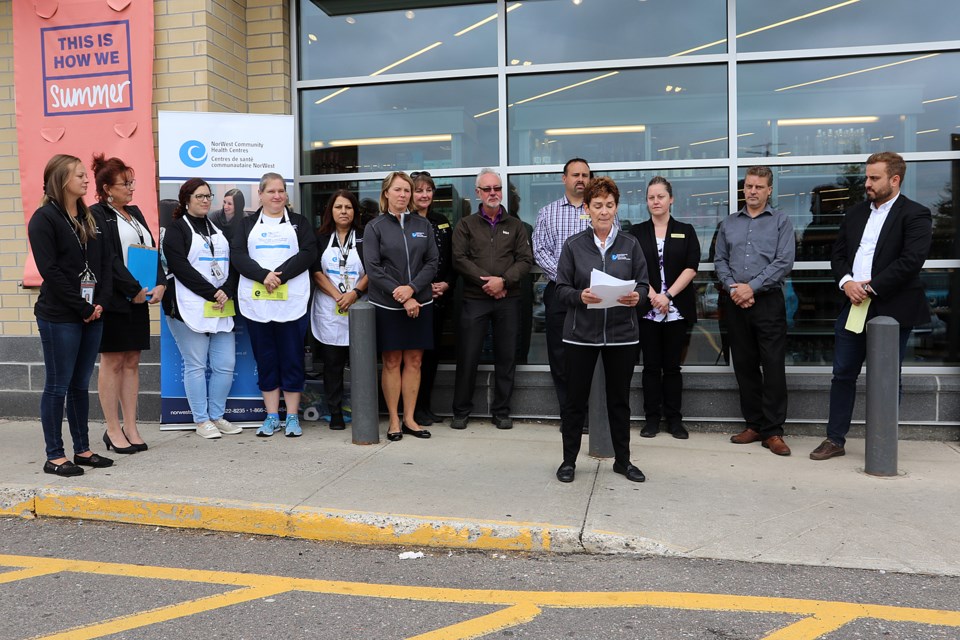 A fetal alcohol spectrum disorder campaign was launched on Friday, Sept. 6, 2019 at the LCBO on Arthur Street in Thunder Bay, (Leith Dunick, tbnewswatch.com)

THUNDER BAY – No amount of alcohol is safe for women who are pregnant or are trying to get pregnant.

That was the message delivered on Friday afternoon outside the Arthur Street LCBO, as the NorWest Community Health Centre kicked off its annual fetal alcohol spectrum disorder campaign, reminding women and those around them that alcohol and babies in the womb don’t mix.

Maureen Parkes, the FASD co-ordinator at the NorWest Community Health Centre, said it’s important to get the message out year after year, an attempt to lessen the frequency of the disorder, that can leave newborns with a host of developmental and behavioural issues that follow them throughout their lives.

“It’s about making sure people get the message: no alcohol during pregnancy and no alcohol if you’re planning on getting pregnant,” Parkes said.

“It’s safest for the baby. Nobody knows how much alcohol is safe, so that’s why we say absolutely no alcohol during pregnancy. We want the best outcome for baby.”

Parkes said she’s not sure just how prevalent a problem FASD is in Ontario’s northwest, but it stands to reason with higher rates of alcohol use, more women expecting babies are probably indulging when they shouldn’t.

“If you look at the average, or the prevalence rate in Canada, we could easily have a minimum of 11,000 people in Thunder Bay with FASD,” she said.

It’s estimated about two to five per cent of all babies born in Canada are now affected by FASD, according to information provided by the health centre.

At the low end of the scale, that would mean 4,600 in Thunder Bay alone.

Phil Aune, district manager for the LCBO in Thunder Bay and Northwestern Ontario, said they’ve been taking part in the awareness campaign for the past six years.

“It’s very important to use because it’s part of our social responsibility platform,” Aune said.

“It’s about helping people make healthy decisions. We want people to be informed and we’ve been part of this since 2004 providing information within our 670-plus stores in the province, to help people make those healthy decisions at times and to understand that no alcohol during pregnancy is the right thing to do.”

Parkes said it’s also important for friends and family of at-risk pregnant women to stand strong alongside them, and encouraged them not to drink while the women in the lives are pregnant.

Staff and volunteers from the Children’s Aid Society of the District of Thunder Bay, Children’s Centre Thunder Bay, Dilico Anishinabek Family Care and the Fetal Alcohol Support and Information Network are also joining the awareness effort.

Verdict in Hobbs, Voss extortion trial expected today
Feb 20, 2020 8:09 AM
Comments
We welcome your feedback and encourage you to share your thoughts on this story. We ask that you be respectful of others and their points of view, refrain from personal attacks and stay on topic. To learn about our commenting policies and how we moderate, please read our Community Guidelines.