Alexander Fortier loves digging in the dirt. He got to fulfill his archaeological dream on Thursday, spending the day on a fruitful dig that unearthed evidence of past copper use and possible stone tools.
Jul 30, 2015 5:34 PM By: Leith Dunick 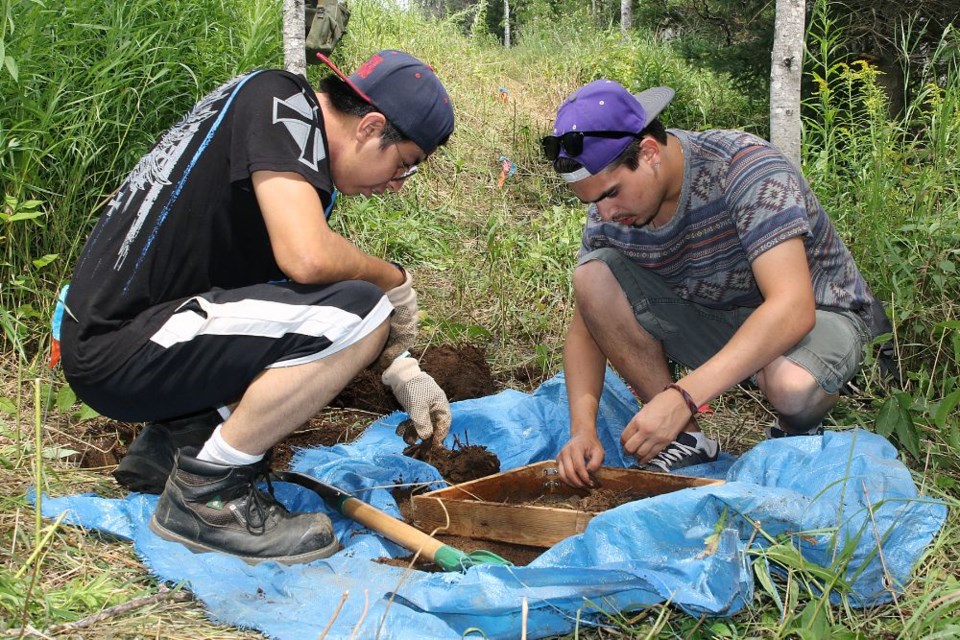 Alexander Fortier (left) and Sean Morriseau sift through dirt on Thursday in a search for ancient artifacts. (Leith Dunick, tbnewswatch.com)

He got to fulfill his archaeological dream on Thursday, spending the day on a fruitful dig that unearthed evidence of past copper use and possible stone tools.

The dig took place along the shores of the McIntyre River, tucked in the woods on Lakehead’s campus.

It’s Fortier’s second year in the program, offered up through the two post-secondary institutions with the help of Outland Camps, this year joined in partnership by the university.

“It really gave me more stuff to add to my resume and I really want to get into forestry,” Fortier said.

“Today we’re looking for artifacts in the ground … There used to be a bridge somewhere around this area. There not really sure where it was, so we’re just trying to dig up a few things and try to get a closer look at where it could be.”

Getting paid to learn about science and nature is just an added bonus, he said.

It’s her first time in the program, and said it was pretty cool – and a little scary – when she and her fellow high-school students went underground in a mine earlier in the week.

“It was a great experience,” she said.

The job opportunities that might arise because of this experience are why she decided to forgo some of her summer vacation and spend her days in the great outdoors.

“It’s better chances for jobs in the future,” she said.

“I kind of enjoy digging the holes. But it’s finding fossils and old stuff from the past. It’s pretty cool, I think.”

Riley Burton, chairman of the school of engineering and technology at Confederation College, said the program has been a booming success since it first began in 2000.

The college has been involved for more than a decade and Burton said it’s a great learning experience for everyone involved.

“This is not a summer camp for these students. This is a paid work placement. They get to learn the value of hard work. They get to learn some personal financing. For a lot of them it’s their first job. And they also get introduced to the great opportunities we have in the natural resources sector.”

More than 55 students took part this year in the program, which has a new name – The Mink Lake First Nations Youth Employment Program – to reflect its new partnership.