Thunder Bay Minor Football Association says public health rules will allow them to play flag football from August until the end of October, the traditional tackle football season.
Aug 13, 2020 8:24 AM By: Leith Dunick 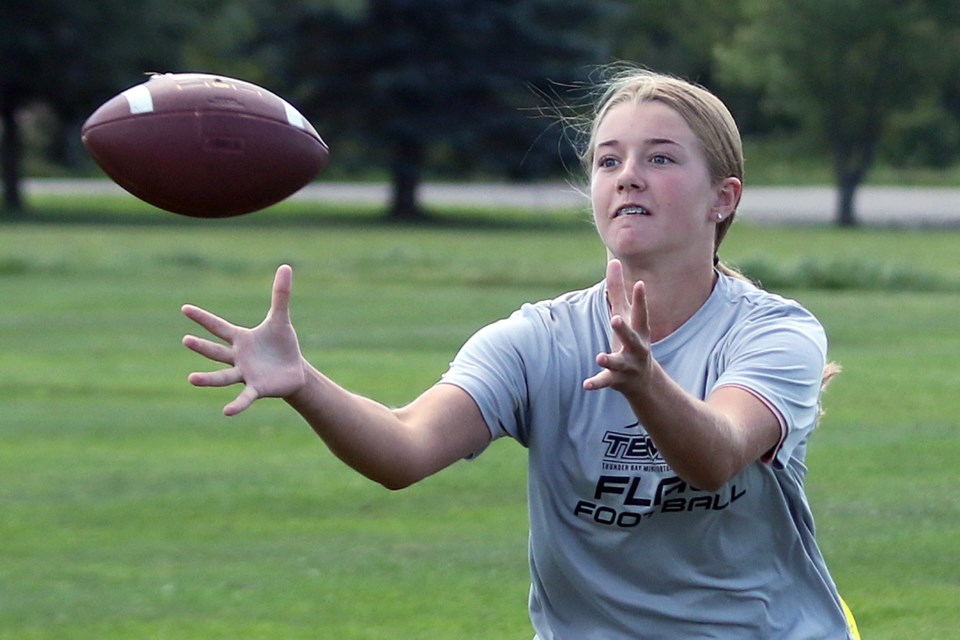 Until recently, however, the 13-year-old soon-to-be Grade 8 student wasn’t sure if she was going to have the chance to play again this year.

In late July, Thunder Bay Minor Football Association received permission from the Thunder Bay District Health Unit to return to the field, allowing the organization to offer flag-football enrolment, which will take place of their usual fall tackle programs.

Lindsay, who plays flag football in the spring league anyway, is ecstatic. The youngster took part in some warm-up pass-catching drills recently, happily running routes in bare feet, just to get some time on the gridiron in.

Like many teenagers, her world has been turned upside down by COVID-19. This is a chance at bringing a little normalcy back to her life.

“A lot of things you don’t know what’s going to be happening and it’s really crazy right now,” she said. “Just knowing you can have something and knowing you’re going back to it – I love flag football.

“This would be my second year and it’s so fun because my brother and my dad have always loved football and I’ve always grown up playing with them.”

It’s a sport she believes she was meant to play.

For TBMFA, being allowed to offer some sort of program this fall is great, said Ryan Bliznikas, an executive and coach with the organization.

It’s great news for the entire football community, he said.

“Basically now we’re just transitioning our spring flag (football) to the fall program, as it’s a lot easier to run a full program because of the small roster sizes and the small amount of kids on the field,” Bliznikas said.

“It doesn’t really limit us to how many games we can run on the stadium field.”

Teams will play in pods, as current regulations in Ontario allow bubbles of up to 50 players to compete against one another.

Bliznikas said they could run multiple pods, and, if the rules are loosened, might be able to play inter-pod games at some point down the road.

Registration can be found at www.tbmfa.com. Evaluations take place on Aug. 17 and the season runs from Aug. 24 to Oct. 31.