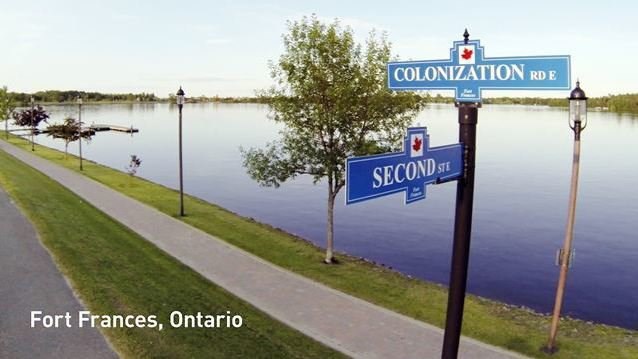 FORT FRANCES, Ont. – The town of Fort Frances is set for a debate over its controversially named Colonization Road, for the second time in four years.

Town councillor Douglas Judson, who supported a failed bid to change its name in 2017 before his election, said he sees a growing appetite to move forward on the issue in the community, located about 350 kilometres west of Thunder Bay.

Judson announced Tuesday he had tabled a resolution that, if approved, would launch a consultation process to rename the street.

The resolution, expected to be debated on Nov. 23, has the support of several First Nations and Indigenous groups in the area.

“We shouldn’t continue to institutionalize a word that only stands for what is effectively a harmful ideology, that has caused damage to people who live in our community and that continues to cause damage,” Judson told Tbnewswatch.

According to Judson, colonization roads were created by the Province of Ontario before confederation to provide access to land for settlers, and handed over to municipalities in 1913.

“That is, as far as I know, the genesis of our Colonization Road,” he said.

The councillor said he understood some who grew up in the area, like himself, were still grappling with why the change was necessary.

“I admit, growing up in this community, it’s only been in recent years that I’ve really had an ‘aha moment’ where I realized what that term meant, and why it was so problematic for some of the people I call my neighbours and friends,” he said.

His resolution includes references to the Truth and Reconciliation Commission call to action for municipal and other governments to “repudiate concepts used to justify European sovereignty over Indigenous peoples and lands,” and supportive statements from Indigenous leaders.

“Although many may ask what difference a name or a phrase may make and suggest they are merely words, I have to wonder if they view their words of reconciliation with the same level of indifference,” said Ogichidaa Francis Kavanaugh, grand chief of Grand Council Treaty #3.

“With this in mind, it is very difficult to believe reconciliatory promises and requests of cooperation when there has not been basic efforts to address the colonial legacy present in the region.”

The resolution also has the support of the chiefs of the Couchiching, Mitaanjigamiing, Nigigoonsiminikaaning, and Naicatchewenin First Nations

Some Fort Frances residents had raised questions about cost and impact to residents, Judson said, such as the need to change identification documents.

“I think a lot of those are legitimate questions that the committee proposed by the resolution should consider,” he said. “Once again, though, reconciliation is not a burdenless process.”

Those same concerns featured prominently in discussions in 2017, when the previous town council voted 5-1 not to take action after an online petition called to change the road’s name.

The issue came to national prominence in 2016 thanks to the documentary Colonization Road, which featured Ryan McMahon, a comedian and podcaster who hails from neighbouring Couchiching First Nation.

The City of Kenora renamed its own Colonization Road soon after, in 2017.

Judson hoped the movement to rename Fort Frances' road could spur constructive dialogue in the community. The councillor has organized a Nov. 25 panel discussion on the issue entitled Colonization in Context.

It will feature Lloyd Napish, a councillor with Migisi Sahgaigan (Eagle Lake) First Nation, who is part of the effort to rename Colonization Avenue in Dryden, JoAnne Formanek Gustafson, a local educator, Jeffrey Denis, a professor of sociology at McMaster University, whose doctoral thesis explored settler-Indigenous history and relationships in the Rainy River District, and a local Indigenous youth and elder.

Residents can find updates and more information at the event Facebook page.