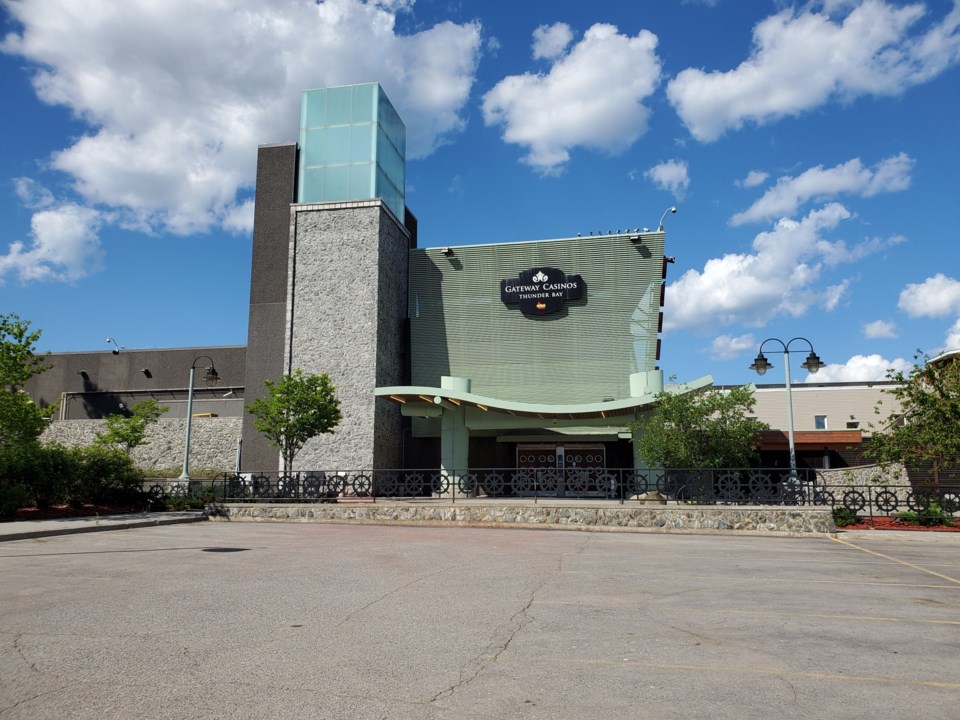 The parking lot is empty outside the Gateway Casino in Thunder Bay, which was closed on March 16, 2020 because of the COVID-19 pandemic (tbnewswatch.com)

THUNDER BAY — Ontario's casino industry is anxious to reopen after being shut down for nearly four months because of COVID-19.

The province has not announced a date, but operators hope to get the green light when the government moves to Stage 3 of its reopening plan, possibly later this month.

Although the government has not specified what will be included in Stage 3, its general framework released in April indicated Stage 3 would mean opening all workplaces "responsibly" and further relaxing restrictions on public gatherings.

The framework also suggested that mass gatherings such as concerts and spectator sports events would remain prohibited indefinitely.

Rob Mitchell, spokesperson for Gateway Casinos which operates the casino in Thunder Bay and numerous other Ontario communities, says "We're still waiting to hear from the provincial government whether we will be a part of Stage 3. We expect we will."

In an interview with tbnewswatch.com, Mitchell said "We're prepared. We've worked very hard to get our facilities ready for reopening in terms of personal protective equipment, sanitation stations and that kind of thing."

Mitchell said a detailed plan has been submitted to the province regarding the hygienic measures that would be put in place to protect casino patrons and employees.

Beyond that, he said, the reopening of casinos is beyond the industry's control.

"Any decision to reopen will be determined by public health officials in cooperation with the government, the Alcohol and Gaming Commission of Ontario, and the Ontario Lottery and Gaming Corporation."

Last month, an industry group – the Canadian Gaming Association – presented its strategy for reopening to the legislature's Standing Committee on Finance and Economic Affairs.

Mitchell said the CGA is waiting for feedback from the province.

When asked to speculate about the number of people who might be allowed in casinos at any given time, he said that's in the government's hands.

However, it's been reported that the industry has proposed a maximum of 50 per cent occupancy and the elimination of many playing spots to ensure physical distancing.

In the meantime, Gateway has reached reached return-to-operations agreements covering hundreds of union members at some of the company's properties in Ontario and B.C.

The company and Unifor said Tuesday the agreement includes an extension of benefits, improves job security, and gives union members the option to choose a retroactive paid leave, partially funded by the Canada Emergency Wage Subsidy.

They said it also contains a number of items to help the company return to operations more quickly and efficiently, once government approval is obtained.

Unifor national president Jerry Dias called the agreement "an important step in the right direction towards providing our members with certainty in these uncertain times."

More than 140 Gateway Casino workers in Thunder Bay are represented by the Steelworkers union.

A union representative told Tbnewswatch an announcement is pending about a similar deal it has struck for its members at Gateway properties in Thunder Bay, Sault Ste. Marie and Sudbury.

Jason Lacko said that, with casino reopening dates still uncertain, having an agreement in place is important because "they know the staff will be there. That's probably the biggest hurdle."

Lacko added "We don't know where people decide to go in four or five or six months, or however long it takes. People start going somewhere else. At least knowing the staff will be retained is probably worth more than anything."

Mitchell said he believes most of the laid-off staff have had access to the Canada Emergency Response Benefit program.

Police seek missing 27-year-old
Aug 9, 2020 8:36 AM
Comments
We welcome your feedback and encourage you to share your thoughts. We ask that you be respectful of others and their points of view, refrain from personal attacks and stay on topic. To learn about our commenting policies and how we moderate, please read our Community Guidelines.
The latest on COVID-19 Local and global updates →
IT'S PATIO SEASON!
Patios That Are Now Open