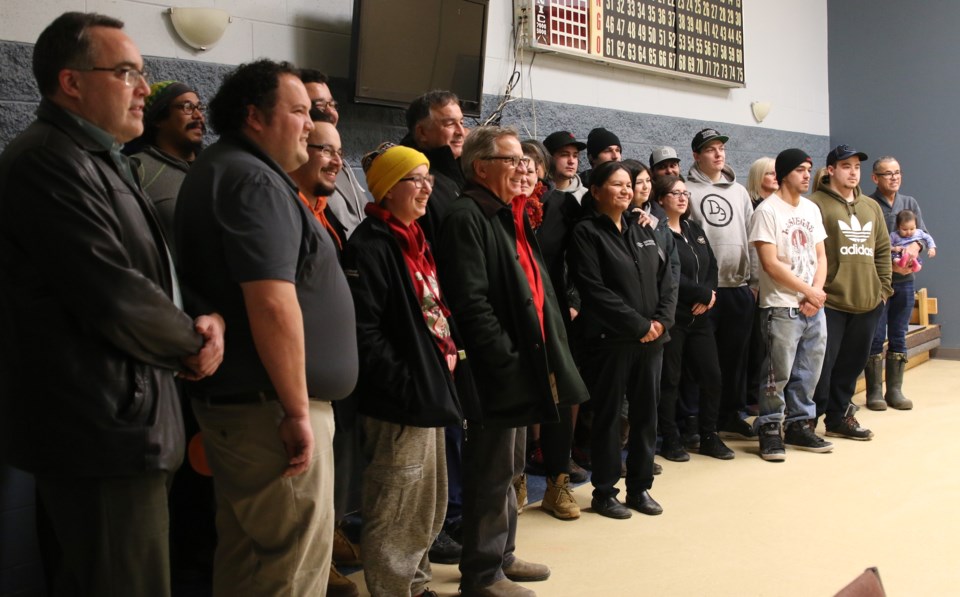 Minister of Indigenous Relations and Reconciliation, David Zimmer, along with students undergoing training to work on the East-West Tie Transmission Project.

THUNDER BAY - First Nations community members will be playing a leading role in the construction of a major project that will change the way power is transmitted along the northern shore of Lake Superior.

With the help of a $240,000 investment through the Ontario Indigenous Economic Development Fund, more than 240 members from area First Nations will receive specialized training for employment opportunities related to the East-West Tie Transmission Project and beyond.

Minister of Indigenous Relations and Reconciliation, David Zimmer, made the announcement in Fort William First Nation on Monday.

The $240,000 investment is being used by Supercom Industries to hire recruiters and train First Nation members to work on the project. Recruiters have been hired in the six First Nation Communities affected by the transmission line, including Michipicoten, Pic Mobert, Biigtigong Nishnaabeg, Pays Plat, Red Rock and Fort William First Nation.

“We were able to task these employees with reaching out to all of the membership within the six communities as well as across the whole region to start recruiting people that are interested in gaining the skills to work on the construction of the East-West Transmission Line,” said Matthew Dupuis, director with Supercom.

According to Dupuis, they reached their recruitment goal of 244 people, with an initial intake of more than 300.

Those who have been recruited will undergo training and apprenticeships that will not only train them to work on the transmission line, but prepare them for future careers down the road.

“Wanted to make sure we set example for how major projects happen through First Nation territories, and we wanted to make sure that all of the jobs we went after were not just jobs, they were careers and transferrable skills,” Dupuis said.

“They will acquire a skill set that they will carry with them through the rest of their lives,” Zimmer added. “This is life changing for the people who can develop those kinds of technical skills.”

Clifford Collins, a student undergoing training, said the experience of training and connecting with community members has been very rewarding and he is looking forward to starting work on the project.

“This is a wonderful opportunity for our community members and members across Ontario,” he said. “It’s a great thing for the communities to get involved with and allows us to build a career that we may not have had before we started this program.”

“I’m finding it very informative,” Collins continued. “I’m learning things I thought I knew but I didn’t and I can’t wait to get out there and start working.”

Construction on the East-West Tie Transmission Project is expected to begin next November with an in-service date set for 2020.

Dupuis said the transmission line will enable many projects in the north, such as the possible smelter in Thunder Bay, as well as gold mines left stranded because of a lack of capacity in the power lines.

“The significance of the actual infrastructure was paramount because now so many projects can get off the ground,” he said.