Plans to use special anti-graffiti paint in the tunnel fell through.
0
Jul 17, 2019 3:55 PM By: TbNewsWatch.com Staff 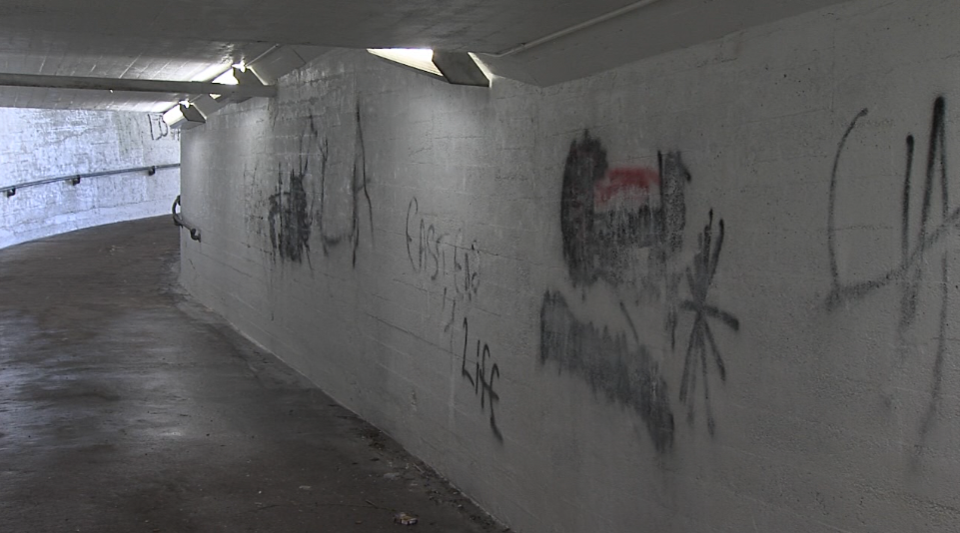 THUNDER BAY — A plan last year to apply special anti-graffiti paint to the walls of the pedestrian underpass connecting Simpson Street to Thunder Bay's east end failed because of a delivery issue.

The city was unable to acquire the paint in time for a refurbishing project in the tunnel, so workers used regular paint.

Just two days after they finished sandblasting the walls and applying fresh paint, a clean-up crew had to return to the underpass to remove new graffiti.

Since then, they have had to make numerous repeat visits to do the same.

"Over the course of the last year and this year, we've had some graffiti issues," says Brad Adams, the city's roads manager,

"We do have a special cleaning agent that we use to get some of the smaller areas cleaned off, but with a large area of graffiti it's difficult and challenging with the special cleaner, so we just paint over it now," Adams said.

Anti-graffiti paint leaves a protective layer on the surface that makes it hard for spray paint or permanent marker to adhere, while making it easier to remove graffiti by pressure-washing.

As part of the refurbishing of the tunnel last year, the city installed improved lighting, but Adams said there are no current plans to put security cameras in the subway.

There are cameras in the overpass to Marina Park, however Adams said the graffiti problem there is relatively minor compared with other city properties.

He said the city may take another look at using anti-graffiti paint in the east end tunnel.

In the meantime, Adams said, residents who spot graffiti on any city property should "Call 211 and report the locations. We'll try and get there as quick as we can and deal with it."

Upon notification, the city commits, whenever possible, to remove graffiti from city-owned or operated property within:

The city's graffiti management by-law states that no one is allowed to put graffiti on property, and property-owners must remove graffiti if they become a target.

There is a provision for the city to provide financial assistance to residents and small businesses targeted by graffiti.

TTC examines expediting an order for more streetcars
Jan 28, 2020 5:12 PM
Comments
We welcome your feedback and encourage you to share your thoughts on this story. We ask that you be respectful of others and their points of view, refrain from personal attacks and stay on topic. To learn about our commenting policies and how we moderate, please read our Community Guidelines.