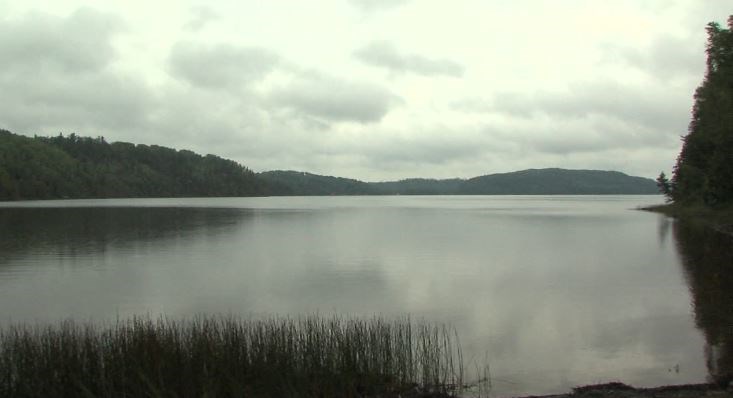 The ministry reported its findings today to the Thunder Bay District Health Unit.

A news release issued late on Wednesday afternoon by TBDHU states, "Note that this result reflects the water conditions when the lake was originally sampled on Aug. 21. Please continue to exercise caution as blue-green algae blooms may recur and toxin production may vary for the rest of the season."

A ministry spokesperson told tbnewswatch.com the sample was taken between the public landing and the cliffs in the southwest arm of Hawkeye Lake.

She described the bloom as "free-floating and dispersed throughout the water column."

Blue-green algae are microscopic organisms that are naturally present in lakes and streams.

They are usually present in low numbers, but can rapidly increase in warm, shallow surface water, resulting in blooms that have the appearance of green pea soup or turquoise paint.

A Lakehead University researcher has also said that human activity can lead to more nutrients entering the water, fostering the growth of organisms including blue-green algae.

Some blooms produce toxins that pose a risk to human and animal health when consumed, come into contact with skin or are inhaled.

Until now, blue-green algae has been uncommon in the Thunder Bay district.

TBDHU cautions that with rising water temperatures due to climate change, they may become more common.

"Property owners who use surface water for drinking or household purposes like dishwashing or showering should consider the risks of doing so," the health unit said in the release.

Feds announce money for northern Ontario tourism projects
Jun 1, 2020 1:17 PM
Comments
We welcome your feedback and encourage you to share your thoughts. We ask that you be respectful of others and their points of view, refrain from personal attacks and stay on topic. To learn about our commenting policies and how we moderate, please read our Community Guidelines.
The latest on COVID-19 Local and global updates →
Support local: Delivery, takeout & more
View local businesses