Hearst man fined $6,000 for shooting down road from vehicle

The incident took place near Nestor Falls where a Hearst man fired down a roadway from a vehicle at a decoy deer set up by conservation officers.
Oct 26, 2020 5:27 PM By: TbNewsWatch.com Staff 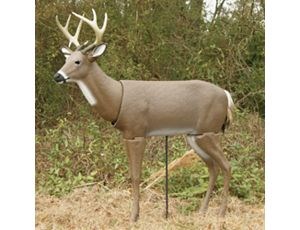 The Ministry of Natural Resources and Forestry use decoy deer for enforcement operations throughout the province. (File).

NESTOR FALLS, Ont. - A Hearst man has been handed a hefty fine and a lengthy hunting ban after shooting down a roadway at a decoy deer near Nestor Falls.

According to the Ministry of Natural Resources and Forestry, a Hearst man appeared before a Kenora judge on Sept. 30 where he pleaded guilty to careless use of a firearm and discharge from a vehicle.

Conservation officers observed the man stop his vehicle, open the door, and shoot at the decoy deer while standing in the vehicle.

The man received a fine of $6,000 and a six-year hunting license suspension, as well as being required to complete the Ontario Hunter Education Course before being permitted to apply for a hunting license again.

The MNRF is reminding hunters that shooting from or down a roadway is both dangerous and illegal.