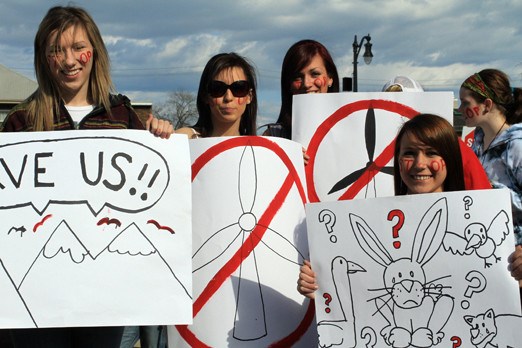 Mike Payne said members of his organization, who object to the construction of a wind farm on the mountain range, also don’t believe the southern Ontario energy company is really taking their concerns to heart.

"We’ve been begging for consultation from the very beginning," Payne said. "That’s been a very large problem. There’s no public consultation unless they’re forced to."

The company on Thursday announced it will host a pair of open houses on May 17 and 18, as required under the REA application process.

The first is slated for the Blake Community Hall. The second will be at Fort William Country Club.

Payne said it appears the project has taken on an entirely new scope with changes being made to the turbines.

Horizon, which has said little publicly since launching a $126-milliion lawsuit against the city last October, in a release issued on Thursday said the change in scope is because the nameplate capacity for each turbine has been increased from 1.5 megawatts to two megawatts.

"This will not increase the height of the turbines. The increase of the nameplate capacity will permit Horizon Wind to build the first 16.5 megawatts with only eight turbines instead of the proposed 11," the company writes. "In other words, Horizon will be able to build a given amount of megawatts with fewer turbines."

On Monday city council voted 8-4 in favour of an amended agreement with Horizon, a deal that saw two turbines moved further away from residential areas.

The deal also put an end to the litigation between the company and the city.

Payne said his group found 144 errors, omissions and other problems with Horizon’s first attempt at the REA process, and promised they’ll be going through the next one with a fine-tooth comb between now and May 18, the final day to submit comments to the provincial ministry of the environment.

He rejected Horizon’s notion that the company’s submitted REA was a pre-submission completeness review.

"Why would you waste your time? I would put my best foot forward, especially if (they) want to start digging in September," Payne said.

He added he’s worried the city’s compromise means decades of trouble ahead for residents.

"The city has solved its lawsuit, but it opens Horizon up to do what they want for the next 45 years," he said.

NOMEPC members have suggested property values in the Neebing Ward neighbourhood could fall by as much as 50 per cent, with Payne adding a multi-million lawsuit from residents could still be forthcoming.

The province must approve the REA before the turbine farm will be permitted to go ahead.