The City of Thunder Bay is facing a $126-million lawsuit in the aftermath of its decision to approve only 14 of 18 of Horizon Wind’s preferred wind turbine locations on the Nor’Wester Mountain range. Horizon Wind Inc.
Oct 19, 2010 4:06 PM By: Leith Dunick 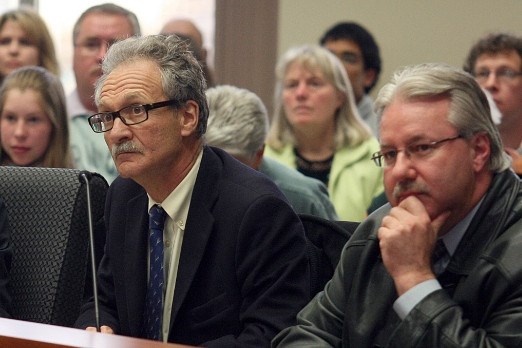 FILE - Horizon Wind Inc. president Anthony Zwig appears before council in this tbnewswatch.com file photograph. (tbnewswatch.com)
The City of Thunder Bay is facing a $126-million lawsuit in the aftermath of its decision to approve only 14 of 18 of Horizon Wind’s preferred wind turbine locations on the Nor’Wester Mountain range.

Horizon Wind Inc. confirmed the lawsuit was being filed at 4 p.m. Tuesday at the Ontario Superior Court of Justice, but could not say what the specific damages they were seeking.

A source close to the situation said the southern Ontario company has filed for damages; misrepresentation; breach of contract; breach of duty of good faith, wrongful interference with economic interests, and damages for breach of a non-disclosure agreement.

City officials, in a release issued late Tuesday, expressed disappointment at Horizon's direction, though admitted they haven't yet seen a statement of claim.

“We are disappointed Horizon has taken this position and, once we have received a statement of claim, we will be responding,” said city manager Tim Commisso.

“We believe any lawsuit is unfounded,” he added. “City council approved 14 of 18 sites and by executing the lease the City is fulfilling its obligations to move forward on this project having completed its due diligence.”

Mayor Lynn Peterson, who appeared to be reading the city statement, said Tuesday night during the mayoral candidate’s debate there was little else she could say.

“Because it’s a legal issue, I would like to tell you more, but I will not be able to,” Peterson said.

Council’s decision, reached Monday night after a lengthy in camera session, came a week after it voted 7-5 in favour of approving all 18 turbine locations, as well as the finalized lease agreement.

Horizon Wind originally agreed in 2006 to a land-lease deal with the city allowing them to put turbines on 17,000 acres of city-owned land in Neebing Township. However the province scuttled the company’s original choice on the south side of the Big Thunder Sports Park.
Horizon and the city then agreed to the current Nor’Wester Mountain range location, a decision that was vehemently opposed by nearby residents and business owners.

Coun. Frank Pullia, also running for mayor, voted against the deal on Monday night, but on Tuesday backed the city.

“We have exercised our due diligence, almost to an extreme,” Pullia said. “Because there was always this cloud of potential liabilities, I think the city is in a good position because we have gone step-by-step, followed due process and due diligence, and I think we are on good, solid ground.”

Colin Burridge, the third of six mayoral candidates, said the suit makes no sense to him.
“I cannot understand a $126-million claim against the city, when the city already  agreed and only requested four turbines to be moved. This is a foolish claim by Horizon,” Burridge said.
Perceived front-running candidate Keith Hobbs said he’s been against the turbine locations for months and blamed council for putting the city in “jeopardy.”

“This is a poorly negotiated, poorly handled and very poor site location,” said Hobbs, adding he told Peterson weeks ago about a rumoured $26-million lawsuit he’d heard Horizon was planning.

Jeff Irwin, also running for mayor, said the project has never made any fiscal sense.
“Had we asked the citizens, had we asked the experts, we wouldn’t be in this situation,” he said.

Several council candidates were contacted or spoken to for this story, but none would comment on the record, including Coun. Brian McKinnon, who brought forward the amendment that ultimately did not approve four of the turbine sites.

In her report recommending the city approve the lease and location, city solicitor Rosalie Evans said she made the decision despite the threat of lawsuits from several parties.
The company was planning to spend $75 million to build the wind farm.

If Horizon Wind wins its suit, money will be taken from the city treasury.