Horwath calls for feds, province to step up for local Bombardier plant 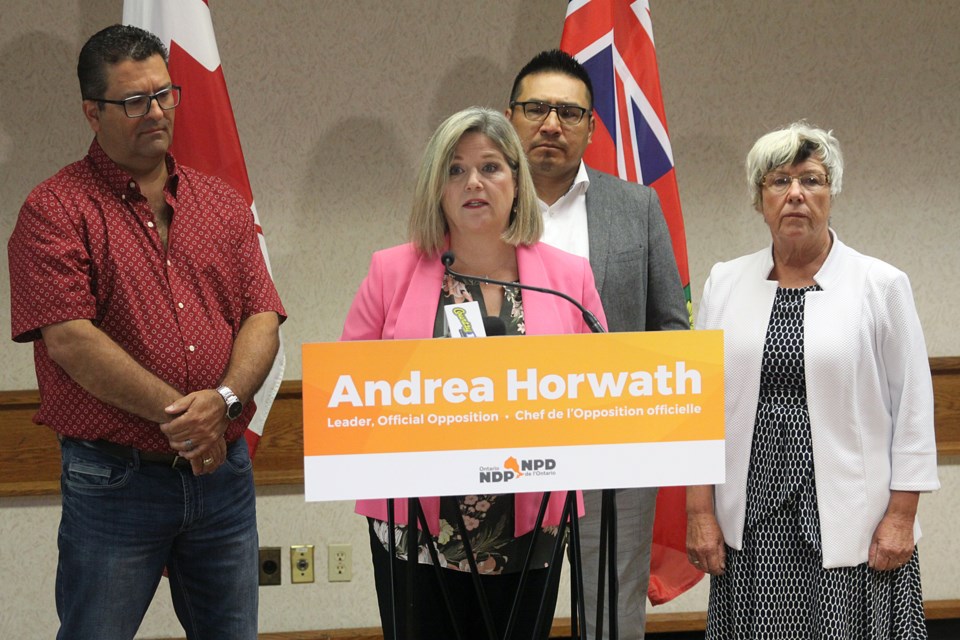 THUNDER BAY – The leader of Ontario’s Official Opposition has had enough of the federal and provincial governments blaming each other for the looming slowdown of Thunder Bay’s Bombardier plant.

Ontario NDP leader Andrea Horwath, during a Friday morning news conference in Thunder Bay, called on both the federal Liberals and Ontario Progressive Conservatives to work together to advance public transit projects, which would increase the need for new mass transit vehicles.

Earlier this month, Bombardier announced that 550 employees at its Thunder Bay factory – half of its workforce – would be laid off in early November with the company wrapping two major projects at the end of the year.

A war of words quickly erupted between federal Labour Minister Patty Hajdu, who also serves as the Liberal Thunder Bay-Superior North MPP, and provincial Economic Development Minister Vic Fedeli, with each pointing the finger at the other level of government for failing the plant. Ontario Premier Doug Ford also chimed in, accusing the federal Liberals of sitting on their hands.

Despite Bombardier’s checkered corporate record in failing to meet deadlines, which has drawn the ire of both the Toronto Transit Commission and Metrolinx, Horwath stood behind the local plant.

“I think the workers deserve the work,” Horwath said.

“At the end of the day, the workers deserve the work and Ontarians and Canadians deserve to see your tax dollars putting our families to work and providing good jobs for folks so that they can provide a good life for their families. These are the kinds of jobs that they can buy a house, send their kids to college or university. They have benefits. They’re able to contribute to the broader local economy.”

Monteith-Farrell said she has heard that many people are already leaving to seek other employment.

“These workers don’t need levels of government throwing bombs at each other,” Monteith-Farrell said. “What they need is concrete help.”

Prior to the announcement of the layoffs, provincial Northern Development Minister Greg Rickford helped facilitate a proposed order of 36 Metrolinx bi-level cars to guarantee some production at the plant. While union officials welcomed the possibility of new work, they hoped it would only serve as a bridge leading to more substantial contracts.

Local union officials had often pointed to flawed parts supplied by the company’s operations in Mexico as a significant factor in falling behind production schedules, which has prompted calls to increase Ontario’s requirement that mass transit vehicles procured with public dollars be built with 25 per cent Canadian content.

Horwath, who noted that she is from one of Ontario’s major steel producing cities in Hamilton, said ideally raw materials mined in northern Ontario should be turned into steel in Hamilton or Sault. Ste. Marie, which could then be used in manufacturing facilities within the province.

Infrastructure built with public dollars should use local workers, she insisted.

“If there’s nothing that requires the company to ensure that the product has got significant amount of Ontario or Canadian content then they’re going to source it from wherever,” Horwath said.

“We have to have a vision from the federal and provincial level that ensures that we’re getting the kind of quality product that we know these very skilled workers here in Thunder Bay can provide.”

While not firmly committing to bringing an enhanced local content bill to the legislature, Horwath suggested there should be an examination of measuring both the percentages of dollar value of the work, as well as labour hours.

Monteith-Farrell pledged to work the various ministries to ensure affected workers will receive support, including making sure their children get added to OHIP+ and there are available counselling services.

“Losing those jobs is one thing for Bombardier workers but there are a lot of other small industries that are supported by Bombardier in our community,” Monteith-Farrell said.

“What is that going to look like? Is it short term? Are we going to maintain those skilled people and resources here in Thunder Bay? Those are the questions people are struggling with at this point and probably have been struggling with for over the last six months.”