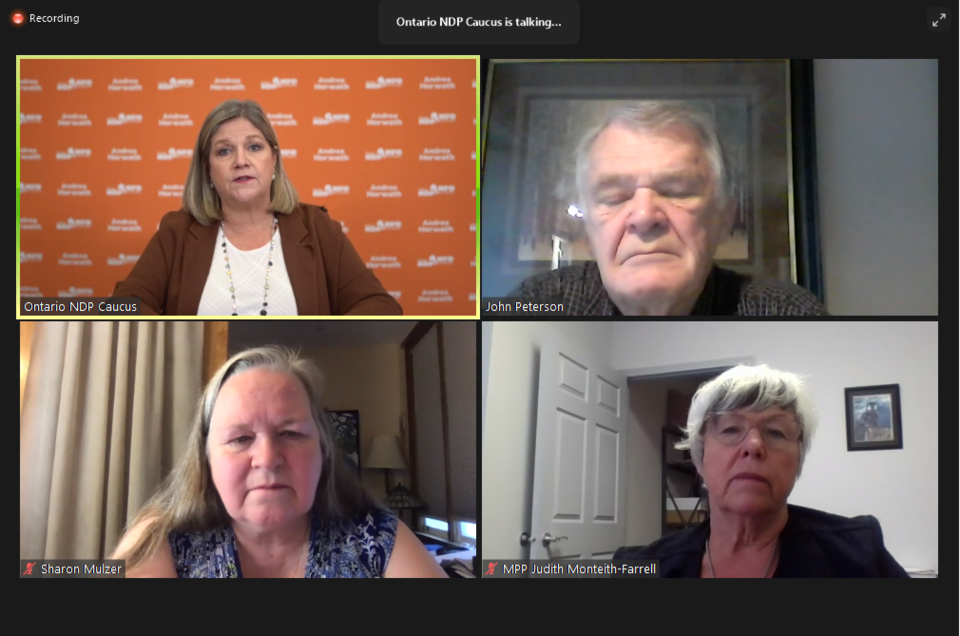 It’s an admittedly costly proposition: the party is pledging $6 billion in one-time capital spending over eight years, and would ramp up operating funding by up to $3 billion a year by 2028.

That would include at least $1 billion for home care over four years.

Speaking to local supporters and media via Zoom Tuesday morning along with Thunder Bay-Atikokan MPP Judith Monteith-Farrell, Horwath argued those investments are needed to protect the dignity of seniors caught in a broken system.

“Our plan is going to be expensive, but for us it’s an absolute priority,” she said. “This is a complete overhaul of a long-term care system that was broken. We need to get back to a not-for profit, public system.”

Horwath called the plan the first plank in the party’s platform for a 2022 election more than a year and a half away.

She pointed to a scathing report issued by the Canadian Armed Forces after the military was called in to support five Ontario long-term care homes at the height of the COVID-19 pandemic. The report detailed instances of abuse, neglect, underfeeding, and other inhumane conditions.

Horwath spread the blame for that situation among Ontario’s Liberal and Progressive Conservative governments, as well as a for-profit system that “creates an imperative to cut the quality of care.”

A Toronto Star analysis suggested that, despite being hit with outbreaks at similar rates, residents in private, for-profit care homes were far more likely to be infected with COVID-19 and to die from the disease.

The long-time NDP leader sketched a vision of a smaller-scale, better-funded care system operated by non-profits and municipal governments. That would involve an immediate end to new licenses issued to for-profit operators, and allowing existing contracts to expire, if the party were to form power in 2022.

Homes themselves could also look much different. The party’s plan suggests its goal of clearing waitlists for long-term care by adding 50,000 new spaces will rely heavily on smaller homes.

“If we’re going to build 50K new units, we’re not going to continue to grow a system where people are warehoused in institutional settings,” Horwath said Tuesday.

She noted the smaller home model had found success in places like the Netherlands, Wales and Ireland, and some parts of the United States.

The plan includes a wage hike of $5 an hour over pre-pandemic levels for PSWs. The Ford government has offered those workers a temporary $3 pay boost that will expire in March.

Horwath also slammed the Ford government for lowering inspection standards for LTC homes. A CBC investigation found only nine of the province’s more than 600 care homes received a comprehensive inspection in 2019, a significant drop from previous years.

The NDP’s plan promises yearly comprehensive inspections for every home, increased penalties for non-compliance, and a new provincial Seniors’ Advocate.

Horwath's virtual tour of Thunder Bay Tuesday was also set to include a meeting with leadership at the Thunder Bay Regional Health Sciences Centre and Unifor Local 229, both closed to media.