Buffalo Sabres goaltender joined by other local hockey players to teach youngsters how to take their games to the next level.
Aug 20, 2019 1:30 PM By: Leith Dunick 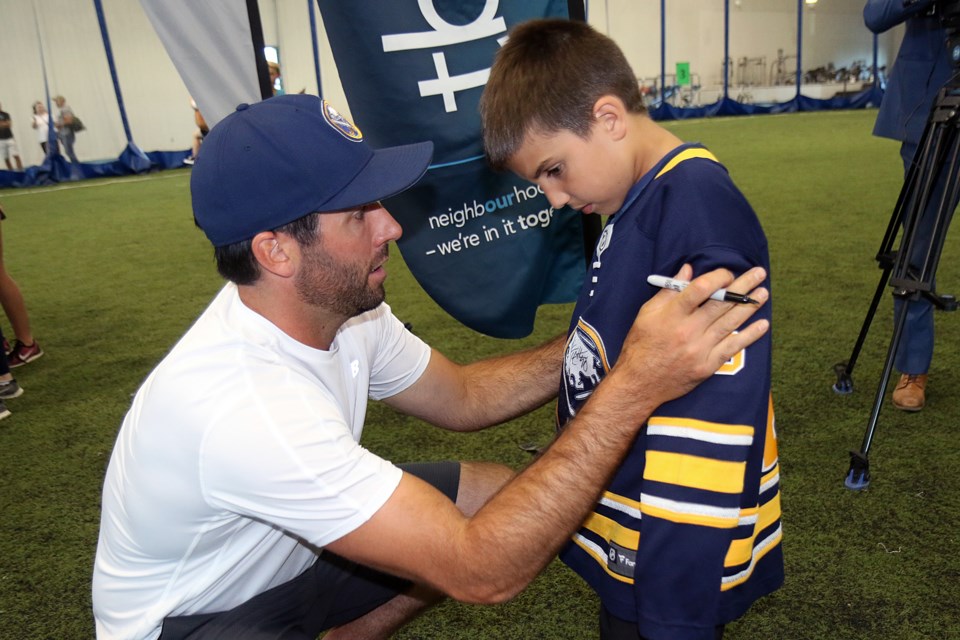 Hutton took every piece of advice they were willing to share, and eventually persevered and achieved his ultimate dream, making the National Hockey League.

Hutton said it’s a great event, one he was happy to help out.

“Especially with sports and how far it took me,” said the 33-year-old, set to enter his eighth NHL season this fall.

“I was fortunate enough, my parents worked hard. We didn’t come from a ton of money by any means, but they spent a lot of money so I could play hockey. Goalie equipment and things like that aren’t cheap. I look at the doors that opened for me in sports and the things I’ve learned, so it’s a great event where you can come out and help a great charity that helps a lot of kids.”

PRO Kids provides equipment and registration fees to children who might otherwise not be able to participate in sports.

Youngsters taking part in the Train With a Pro event had to raise a minimum of $50 to donate to the organization, for a chance to see what it takes to make it in professional hockey.

Also helping out were members of the Lakehead Thunderwolves hockey teams, as well as ECHL champion Todd Skirving of the Newfoundland Growlers.

Twelve-year-old Ethan Gabler, a goaltender himself, said it was a fantastic opportunity to be able to pick the brain of a fellow puck-stopper who’s made it to the game’s pinnacle.

“The running course was so fun,” said Ethan, describing his favourite activity of the night. “You run three laps non-stop. I learned balance and stuff too.”

Of course, PRO Kids and the children it serves were the big winners of the night.

Ally Drombolis, the marketing and fundraising assistant for PRO Kids, couldn’t thank Hutton and the other athletes enough for their participation.

“It’s amazing. They’re tremendous role models for the community and for the kids. It’s so exciting to see the kids come in and the big smiles on their faces and to be able to train alongside Carter and see what it takes to be a pro,” Drombolis said.

“I think there’s a lot of value in that and they get to have fun while they’re doing it.”