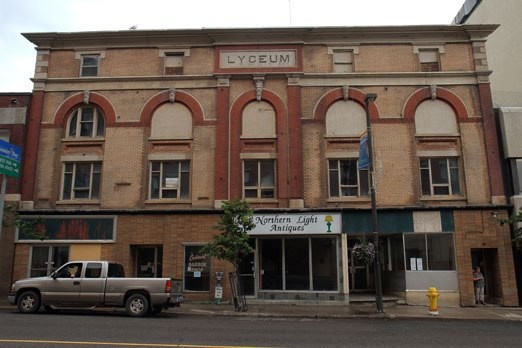 The former Lyceum Theatre was once a celebrated building in Port Arthur. (Jamie Smith, tbnewswatch.com)

The city says the former Lyceum Theatre needs to be demolished immediately.

A place that attracted then Premier of Ontario James Whitney when it opened in 1909 is now literally for the birds as part of the roof has caved in, attracting animals and weather to the house James Whalen built.

A notice posted on the derelict building last month states that Mario Simonaitis must apply for a permit to demolish the building immediately.

"The building is structurally inadequate and unsafe due to being in a condition that could be hazardous to the health or safety of persons in the normal use of the building, persons outside the building or persons whose access to the building has not been reasonably prevented," the ordinance states.

It's just the latest in a long list of once celebrated landmarks that will likely be turned to dust. The city is now trying to figure out how to deal with its derelict buildings. That might lead to an audit of property in the city.

"That could be costly," mayor Keith Hobbs said.

Places like the Lyceum are privately owned, which makes it difficult for the city to do anything about abandoned buildings.

"When you have a numbered company it's sometimes hard when they just walk away," Hobbs said.