Advocates for injured workers say lack of support placing burden on the taxpayer.
Dec 13, 2016 8:09 AM By: Doug Diaczuk 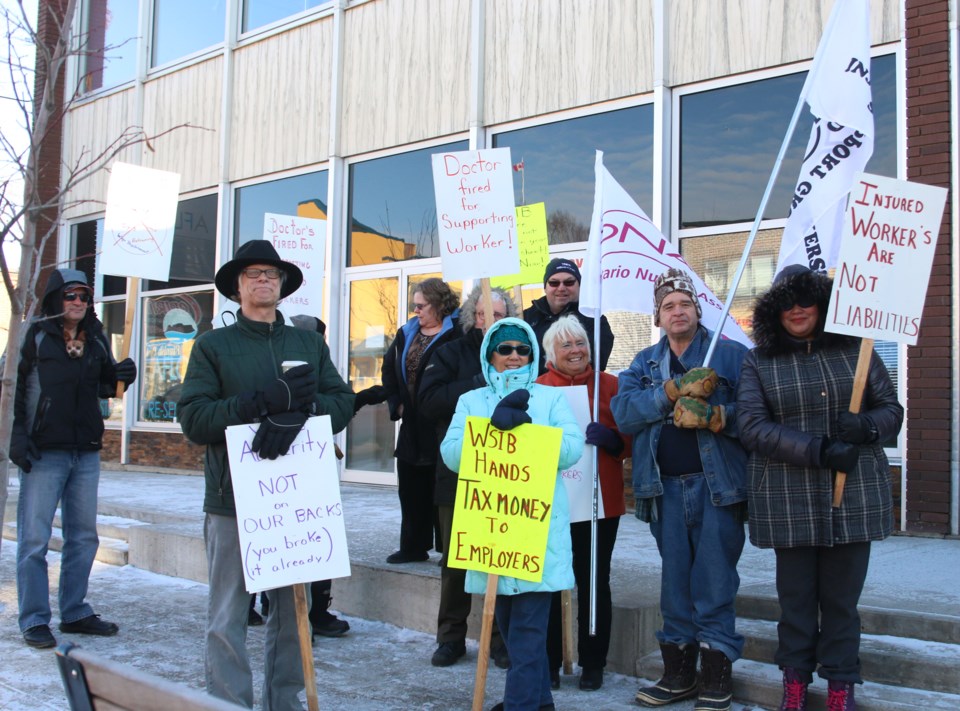 Members of the Thunder Bay and District Injured Workers Support Group hold a demonstration in front of MPP Michael Gravelle's office on Monday, calling for a public inquiry into WSIB.

THUNDER BAY - Injured worker advocates across the province are calling on the Ontario government to launch an inquiry into the Workplace Safety and Insurance Board.

Rallies were held across the province on Monday, which included local members of the Thunder Bay and District Injured Workers Support Group, who held a demonstration in front of MPP Michael Gravelle’s office.

“We’re still pushing for a public inquiry,” said Greg Snider, president of Thunder Bay and District Injured Workers Support Group. “We still need a look at how WSIB is choosing to do their business.”

An inquiry into the WSIB has been called for the last two years and Snider said other than a second meeting with the head of the WSIB last year, little movement has been made.

According to Snider, the WSIB has become a victim of austerity measures by the provincial government.

“The Ontario network of injured worker groups are very concerned about the austerity budget that seems to have invaded WSIB,” he said. “They are giving less and less out year after year to injured workers. That has an effect on the economy and it affects people’s lives.”

Worker’s injured on the job want to get back to work and be productive, Snider said, but they require proper retraining and physiotherapy that should be made available by the WSIB.

“We know that there are thousands of workers in Northern Ontario that are affected by WSIB and WSIB’s lack of support for them,” Snider said. “It affects our local economy when those people are not out there producing and being productive.”

Snider pointed out the more than 150 different pay scales applied to businesses that are changed every year by the WSIB, which requires a lot of working hours every year.

“That’s a lot of money not going to getting people back to work,” he said.

Snider also pointed out problems involving the WSIB disagreeing with doctor assessments of injured workers, which has resulted in the dismissal of a doctor in Southern Ontario.

“This happened in the case of Dr. Brenda Steinnagel who, after filing a medical report that the WSIB did not agree with, was told by the WSIB to change her report not once, but several times,” a release from the TBDIWSG stated. “When she refused the WSIB arranged for her dismissal.”

“We are hearing about it all the time,” Snider added. “People are going in with medical documentation saying they need this kind of treatment or that kind of a treatment and WSIB is saying no, they don’t agree with the doctor’s order.”

According to Snider, by not providing adequate treatment for injuries sustained in the workplace, the province is only creating more problems, including recurring injuries, mental health issues, and people no longer able to contribute to the local economies.

“If WSIB isn’t paying for people’s care, then they are going to Ontario Disability Support Program (ODSP) and health insurance which is covered by tax payers,” Snider said. “So instead of having employers pay through WSIB, tax payers are paying through ODSP and Ontario Health Insurance (OHIP).”

MPP Michael Gravelle said in an interview with CKPR he is eager to continue to working with the TBDIWSG, however, no public inquiry is planned at this time.