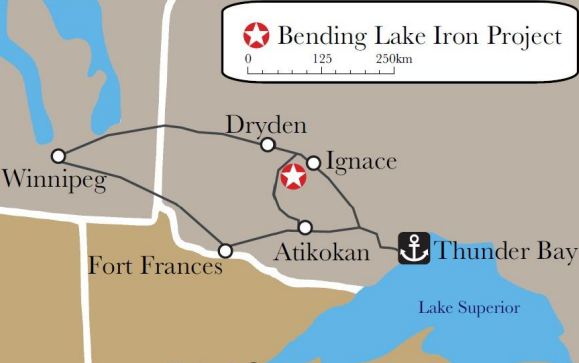 IGNACE, Ont. — The company that acquired a promising northwestern Ontario iron-ore project when the original owner went into receivership waits to hear if a federal environmental assessment will be required.

In 2016, Ambershaw Metallics Inc. acquired 50 square kilometres of mining patents and claims near Bending Lake, southwest of Ignace, which had previously been under development by the Bending Lake Iron Group.

AMI recently submitted documentation detailing its plans for a mine to the Canadian Environmental Assessment Agency.

CEAA has posted the document on its website, and is inviting public comments until Aug. 4, 2019 about the project and its potential for causing adverse environmental effects.

AMI is projecting an open-pit mine with a maximum width of one kilometre, maximum length of 3.2 kilometres, and maximum depth of 300 metres, producing up to 23,000 tonnes of ore per day for between 30 and 40 years.

Processed ore would be in the form of commercial-grade iron pellets or briquettes for North American steel mills.

The processing plant and other facilities would be located close to the mine.

The mine would necessitate the damming and dewatering of a shallow bay in the west arm of Bending Lake.

AMI proposes constructing a 25-kilometre-long corridor containing an all-season road, a railway spur or conveyor line, and a high-voltage transmission line to connect the project with existing infrastructure on Highway 17.

The company says it consulted agencies, the public and Indigenous groups about its plans through 2017 and 2018, and will continue this approach as the project proceeds through its various stages.

According to AMI, about 450 workers would be needed to construct the mine facilities.

They would be accommodated in a portable camp on-site, but the workforce would be downsized once mining started, and most of those employees would live in Ignace.

"Ignace has the capacity to accommodate all mine staff. The town provides community facilities and is more able to accommodate families," the company's brief to the CEAA states.