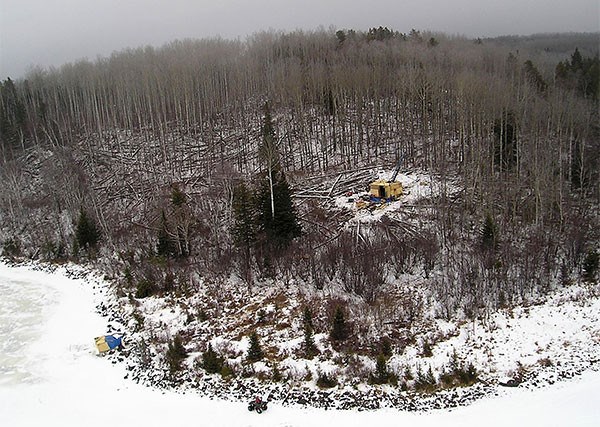 A rechristened junior mining company is taking its first stab at exploring for platinum and palladium on a property halfway between Thunder Bay and the Lac des Iles Mine.

Clean Air Metals began its first round of drilling last week on its Thunder Bay North Project, roughly the same time the Thunder Bay company began trading for the first time on the TSX Venture Exchange.

The Thunder Bay North Project is located 60 kilometres southeast of Impala's Lac Des Iles Mine and 40 kilometres northeast of the city. Highway 527 cuts through the western portion of the project area.

The company has big plans over the next two years to do 25,000 to 30,000 metres of drilling on what's considered a very advanced exploration project.

Since platinum, palladium, nickel and copper are all considered essential global base metals used in the electric vehicle movement, the company changed its name earlier this year from Regency Gold to Clean Air Metals.

Management was reshuffled to bring aboard Abraham Drost as CEO and Jim Gallagher was named executive chairman. Gallagher was a former CEO at North American Palladium, once the owners and operators of the Lac des Iles Mine before it was acquired by Impala last fall.

There's been considerable exploration activity there in the past with more than 800 drill holes and more than $100 million invested.

The last exploration program there came up with a resource estimate of 741,000 ounces of platinum and palladium contained within 9.8 million tonnes and grading at 2.3 grams per tonne.

In a May 22 news release, the company said the first phase of a 10,000-metre drilling program has started on the Escape Lake Intrusion portion of the project.

Work will involve following up on an earlier base metal discovery made by Rio Tinto as well as examining some promising targets.

In a statement, Drost expressed he was "very gratified to be up and trading and commencing drill testing of the Escape Lake mineralized horizon.

"Mineralization at Thunder Bay North is preferentially enriched with the catalytic conversion pollution control metals palladium and platinum in a 1:1 ratio, with ancillary copper and nickel; metals powering the electric vehicle revolution.”

On the COVID-19 front, Clean Air said it's taken all the precautions necessary for staff and service suppliers through physical distancing, self-monitoring, self-isolation or working from home.

A locally staffed diamond drilling company has been hired, which eliminates the need to set up a camp for the crew at the site.