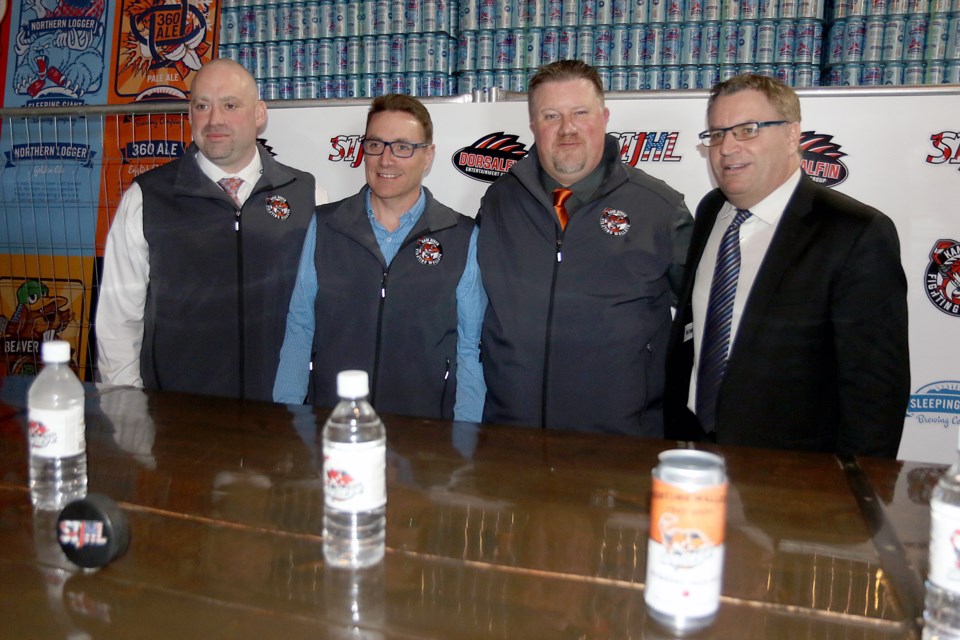 The league on Thursday made it official, announcing the addition of the expansion Kam River Fighting Walleye, giving the Junior A circuit a seventh team for 2020-21.

Team president Derek Geddes said it was the worst kept hockey secret in the city, but he’s excited to be taking the leap into the SIJHL, after founding the junior B Thunder Bay Walleye franchise, a team that will continue to play in the Lakehead Junior Hockey League.

“It’s hard to keep a secret,” Geddes said at an afternoon news conference launching the team – and a new beer – at Sleeping Giant Brewery.

“We’re glad this day is over and we can start putting our feet to the road and working hard at building this organization. We’re really excited, this whole group, about getting this team here, getting out there, getting our coach named, starting to sign some players and getting some season tickets out there and getting the business community to know what we’re all about and our vision.”

Newly appointed general manager Kevin McCallum has plenty of SIJHL experience to draw upon, having helped found the Thief River Falls Norskies, despite detractors telling him the franchise would never get off the ground.

McCallum said he’s confident there’s more than enough room for two Thunder Bay teams in the league, a first since the K&A Wolverines folded and left the Fort William North Stars as the lone local team in the league in 2010.

The Fighting Walleye have built a solid fan base of 250 regulars at the Tournament Centre playing in the LJHL, and McCallum said there are more than enough skilled players to go around.

“We’re going to be very competitive in the community. We’re going to be working with schools. As far as players are concerned, we’re looking for 18- to 20-year olds. We’re not looking to raid the Kings organization by any means,” McCallum said.

“If there are special circumstances where there’s a 16- or 17-year-old and his OHL team believes he should be in a junior A lineup, that’s something we may discuss. But just to fill our lineup, we will not be doing it with 16- or 17-year-olds.”

Like other teams in the SIJHL, the Walleye are expected to operate on a pay-for-play basis, with players anteing up a registration fee to help cover the operational costs of running a junior A franchise.

League commissioner Bryan Graham said he’s confident the team can succeed, where others before, including the K&A Golden Hawks and the Thunder Bay Bulldogs, did not.

“I think there’s renewed interest in junior A hockey at this level especially. We hope that it will create a rivalry. We understand with the player pool they’re going to have to reach outside of Thunder Bay to stock both the teams with out-of-town players as well,” Graham said.

“Everybody feels this is a good plan and we look forward to implementing it next season.”

The league plans to maintain its 56-game schedule and is looking at having each team play all six other teams nine games apiece to start. The Fighting Walleye and North Stars will not both be in town the same weekend unless they happen to play each other, Graham added.

The league is still working with a new ownership group to take over the dormant Minnesota Iron Rangers franchise, which departed after last season, but does not expect the things will line up in time to bring them aboard next season.