Owen Voortman, Luca Ricciardi, Kolten Bourret and E.J. Paddington hoping to take their games to the next level after being selected on Saturday.
Jun 7, 2021 4:57 PM By: Leith Dunick 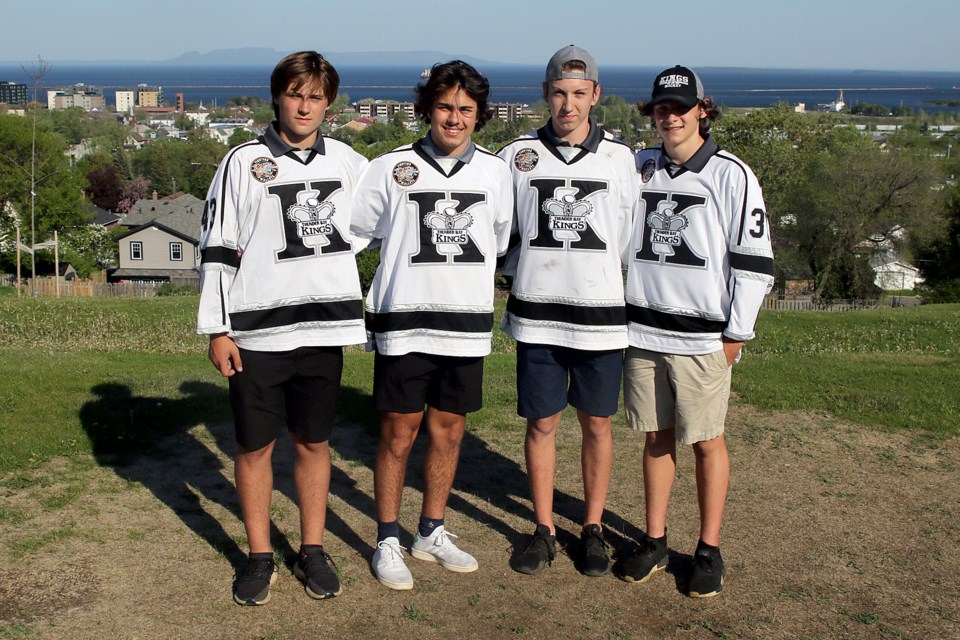 THUNDER BAY – The Thunder Bay Kings only played a handful of games last season, and none in southern Ontario.

It made it tough for the players to be seen and evaluated by Ontario Hockey League scouts, even more disheartening given the fact the organization had planned to play the 2020-21 campaign in the Greater Toronto Hockey League, which would have put them front and centre in the eyes of those making draft-day decisions.

Remarkably, given the circumstances, four Kings players did hear their names called on Saturday, the second day of the two-day, 15-round draft, led by Owen Voortman, nabbed by the London Knights in the 11th round.

Luca Ricciardi went one round later to the Sudbury Wolves, while goaltender Kolten Bourret was grabbed by the North Bay Battalion in the 15th round and left-winger E.J. Paddington was the second-to-last player taken, going 298th overall to the Soo Greyhounds.

Voortman, a centre, spent Sunday at Whitewater Golf Course, attempting to qualify for the Ontario Junior Boys Golf Championship, a tournament won in the past by the likes of former Masters champion, Mike Weir.

He came up short on the golf course, but was still pleased with the way the weekend worked out.

“It felt great to get started with a great organization,” Voortman said of being selected by the Knights, a franchise with four OHL championships and two Memorial Cup titles since 2005.

“They’re a great organization, which is why I was super happy when I got picked by them and can’t wait to get started,” said Voortman, who expects he’ll be invited to rookie camp with the Knights, who are led by former NHLers Mark Hunter, the team’s general manager, and Dale Hunter, the head coach.

“Hopefully I’ll make the team, but if not, it’s OK. It would be a dream come true.”

Ricciardi, the son of Kings coach and former long-time European pro Jeff Ricciardi – who also happens to be a Sudbury scout – said it was thrilling to see his name pop up on the OHL draft board, knowing he’ll have a chance to prove himself for a franchise that several Thunder Bay almuni among its NHL contingent.

Taylor Pyatt and Jason Jaspers also played for the Wolves.

Having his father in his corner has meant a lot to the younger Ricciardi over the years.

“He helps with the backyard rink in the wintertime and developing my skills, probably pushing me a little bit more because I’m his son.”

Bourret is the second goaltender in recent years courted by the Battalion. Former Kings netminder Christian Cicigoi played seven games for the team in 2019-20. It wasn’t an easy year, but being drafted made it worth all the effort.

“We only played about four games this season, so it was really tough. But we were talking and my goalie coach and I were trying to get my name out there a lot this season. Obviously we succeeded. The games didn’t really go the way we wanted them to, but it was fun to actually get out there on the ice and play a couple games,” Bourret said.

“It was awesome for me (to get drafted). The round doesn’t really matter for me this year, especially this year when it was a lot harder to get eyes on us.”

Paddington, a forward, said it’s the chance of a lifetime to be able to try out for the Greyhounds.

“I’m excited for the opportunity to be a part of such a great organization … It was definitely nerve-wracking, waiting until the end.”

Then again, the whole season was too.

“It was tough. Things didn’t really go our way this season, but at the end of the day, it is what it is.”

What it is for these four youngsters is a chance to pursue their hockey dream at the next level. And that’s all they can ask for at this point.