A public discussion asked if Lakehead University should establish an indigenous research institute.
Mar 9, 2017 11:00 AM By: Doug Diaczuk 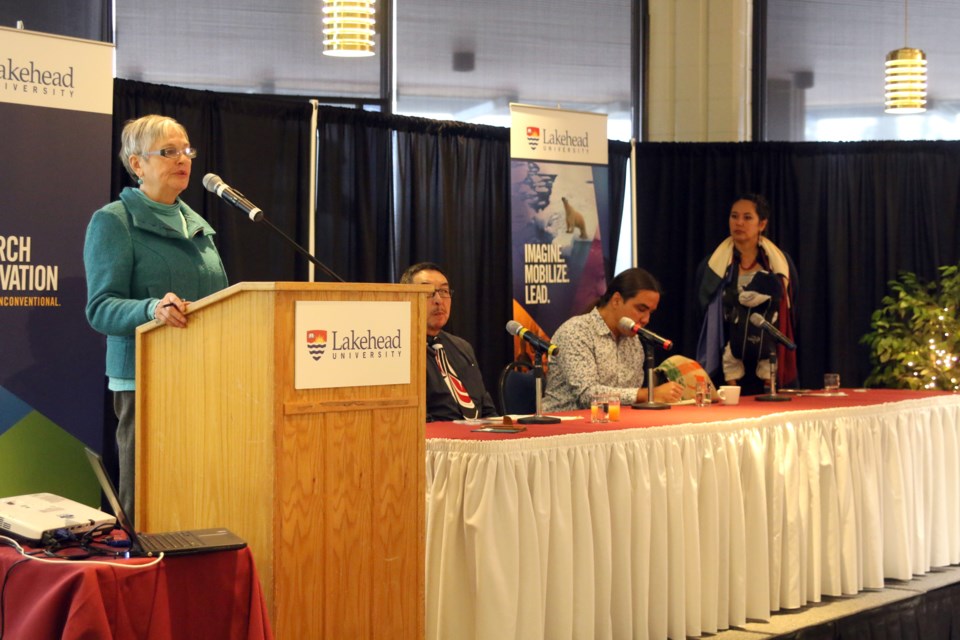 Peggy Smith, interim vice provost of Aboriginal initiatives at Lakehead University, along with Eldon Yellowhorn of Simon Fraser University and Derek Jennings and Michelle Johnson-Jennings of the University of Minnesota.

“Research questions have been determined by researchers rather than the communities,” said Peggy Smith, interim vice provost of Aboriginal initiatives at Lakehead University. “We want to flip that on its head, so that researchers are actually servicing those indigenous communities.”

On Wednesday, a public discussion was held during Research and Innovation Week at Lakehead University to discuss whether or not the post-secondary institution should establish an indigenous research institute.

“The idea has been floating around since 2008,” Smith said. “As we get closer to what we hope will be a provincial and federal funding commitment for the new building, we felt this was a really timely point to have this discussion with a wider group of people, community members, and researchers about what that institute might look like, and whether we need it.”

Smith believes an indigenous research institute is needed at Lakehead because it will allow researchers to better serve communities throughout the region.

“I think both researchers and communities need support in figuring out how to do that,” she said. “We also have a long history of indigenous researchers at Lakehead University and people doing research with indigenous communities. There is an opportunity for the more senior folks to help new faculty that are coming in, provide support, share experiences.”

The discussion included presentations by researchers from British Columbia and Minnesota who work in or are looking to establish indigenous research centres.

Derek Jennings, an assistant professor in pharmacy at the University of Minnesota and outreach director with Research for Indigenous Community Health, said there are other ways of knowing, which need to be recognized in institutions of higher learning.

“Indigenous knowledge is just as valuable as other people’s knowledge,” he said. “So we need to be able to bring those into university settings and building relationships with communities and looking at new knowledge to solve problems, especially in indigenous communities.”

Jennings added universities are supposed to be reflections of the community, province, state, or country they are in, so they need to have a commitment to all peoples.

Research for Indigenous Community Health at the University of Minnesota builds partnerships with communities throughout the state, which Jennings said benefits everyone.

“We do community-based participatory research,” he said. “We engage tribal communities in the research process and by doing so, become equal partners. It’s not just top down research going in saying, you need to eat more fruits and vegetables. It’s going in and saying you are the experts of your community, what do you think would work.”

Smith believes an indigenous research institute at Lakehead University would function in much the same way.

“It’s essentially to bring those people together who have already been doing research, to have discussions with communities about what kind of research questions they would like addressed, because in the past research with the indigenous communities has been on those communities and often results are taken away and not given back to the communities,” she said.

Smith would like to see the institute housed in its own facility on campus and she is hopeful provincial and federal funding will be secured to construct a new building.

But even if a new facility cannot be constructed, an indigenous research institute could still be held in another building on campus.

Smith said there is strong support for the establishment of an indigenous research institute and she believes that will be reflected by the public discussion.

“I hope we have a more solid commitment from everyone that this is a commitment worth pursuing and some meat on the bones, what it will look like, what people would like it to be,” she said.