Led by Isaiah Traylor's 19 and a 14-point, 15-rebound performance from Lock Lam, the Thunderwolves earn yet another statement win over a ranked opponent.
Jan 25, 2020 12:58 AM By: Leith Dunick 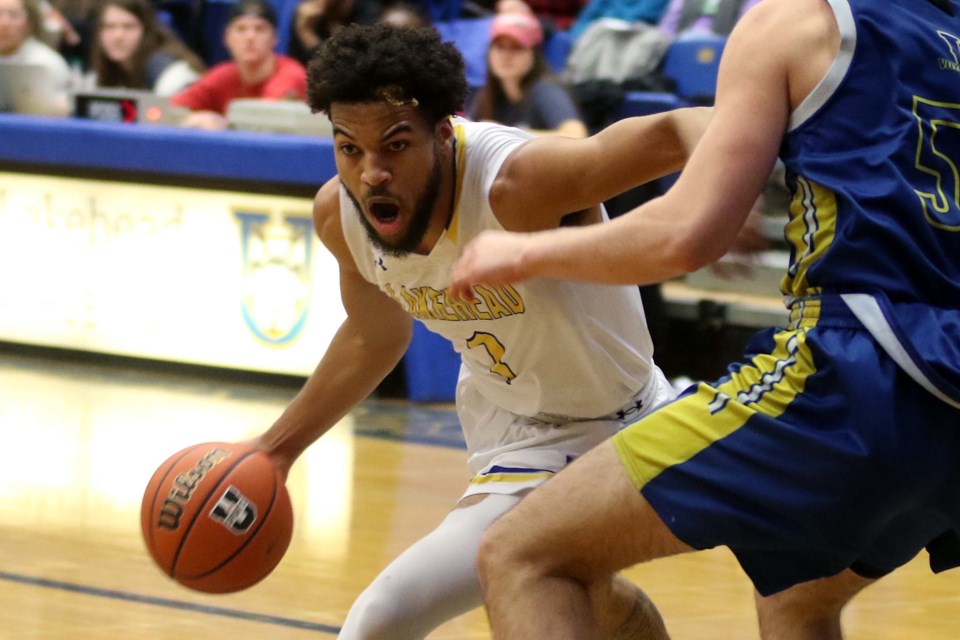 THUNDER BAY – The game wasn't in the books just yet when Isaiah Traylor buried a shot off the glass early in the fourth quarter and raised his hands up and down in the air, urging a rabid crowd to bring the noise.

Well, maybe it was in his mind.

Traylor, who finished with 21 points on Friday night, kept the momentum going and the No. 6 Lakehead Thunderwolves went on to down the No. 7 Laurentian Voyageurs 73-59, holding two-time defending national player of the year Kadre Gray to 15 points – the first time in eight games he didn't collect at least 20.

Lakehead's fifth-year guard said he's tired of the disrespect, noting he was spurred on against the Voayageurs in part because of an article he read disparaging the Thunderwolves and their chances against yet another top 10 opponent.

It was all the motivation he needed.

“I really wanted this one,” said Traylor, who played all 40 minutes as the Wolves improved to 12-3, leaving them two games up in the OUA Central.

“Really everything from here on out is a big one. Honestly, it doesn't matter who we're playing. It's a tough league so every night we've got to bring our all and that's what I tried to do tonight.”

Traylor had plenty of teammates who also brought their 'A' game to the highly anticipated match, which saw fans ring the concourse at the C.J. Sanders Fieldhouse, a rare sight in recent years.

In the early going, it looked like it might be Laurentian's night, as they jumped out to an 11-2 lead in the first. But it didn't last long, the Thunderwolves going on a 13-2 run of their own to take a 15-13 advantage.

The Wolves led by two after one, but the game stayed tight, Lakehead and Laurentian trading the lead five times in the second quarter.

Lakehead began to pull away before the half, Lock Lam, Traylor and Laoui Msambya hitting back-to-back-to-back three-pointers to quickly break open a tie contest and give the Thunderewolves a nine-point lead.

But Gray, who was smothered much of the night by Msambya, which led to 12 turnovers, hit a pair of Steph Curry-worthy three-pointers of his own to drag the Voyageurs back into contention.

It was the last hurrah for Gray, who dreams of an NBA future and was just 3-for-10 from beyond the arc, unable to escape Msambya's clutches.

“I think that's a credit to Laoui,” said Lakehead coach Ryan Thomson. “Really, he spent most of the game guarding him. Rayshawn (Scarlett) too in his minutes. But we were just trying to keep Kadre in front and when he was coming off a ball screen we were just aggressive, trying to make him get rid of it.”

If Traylor was the offensive force the Wolves needed, Lam was the all-around talent who shone at both ends of the court.

“Just looking at his stat line, it's pretty bananas what he put up there,” Thomson said. “That's a pretty impressive show of his versatility and just how he's improved.”

It was Lam's three-pointer with 4.1 seconds to go in the third that swung the momentum the Thunderwolves way for good, part of a 12-0 run that turned a one-point deficit into an 11-point lead in a matter of minutes.

Two arrested amid aggravated assault investigation
Sep 23, 2020 2:52 PM
Comments
We welcome your feedback and encourage you to share your thoughts. We ask that you be respectful of others and their points of view, refrain from personal attacks and stay on topic. To learn about our commenting policies and how we moderate, please read our Community Guidelines.
The latest on COVID-19 Local and global updates →