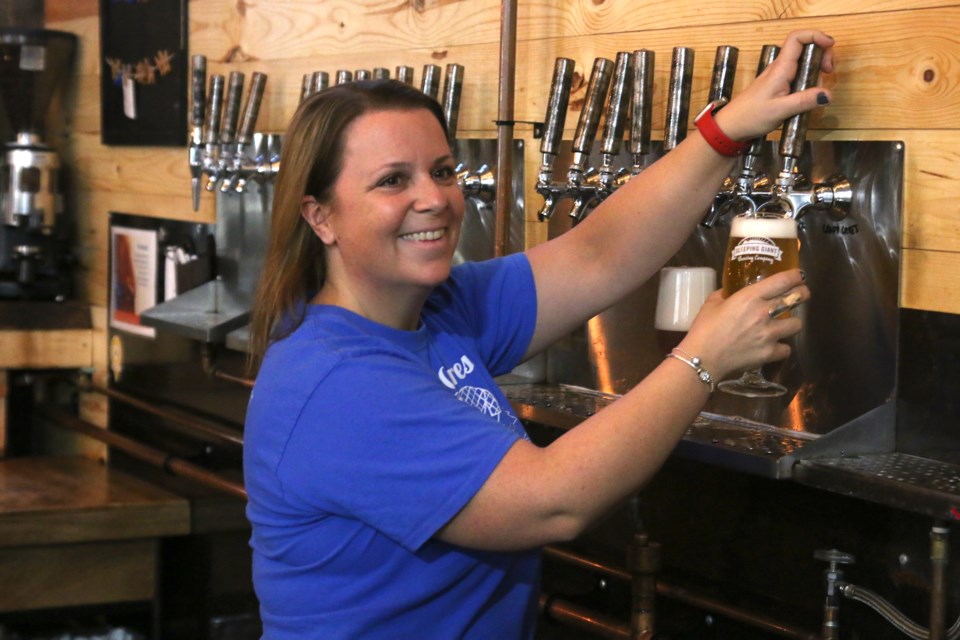 THUNDER BAY – A local brewery and biotechnology company are partnering to produce hand sanitizer, as growing demand meets supply headaches amid the COVID-19 pandemic. Large amounts will be produced at the Sleeping Giant Brewing Company over the coming weeks.

Much of the product is headed to institutions including the City of Thunder Bay, Ornge air ambulance, local doctors’ offices and clinics, mines, and other businesses. It will also be available to the public through online orders, with the brewery saying there should be plenty to go around.

The project is a partnership with Microbiate, the product division of BioNorth Solutions, a local biotechnology company that focuses largely on environmental remediation. Microbiate is sourcing needed ingredients and guiding the production process.

Amber Kivisto, the company’s president and CEO, said as the pandemic grew, they realized they might be able to retool to help meet demand for sanitizing products.

“Being that we make microbes, we kill them on a daily basis too, in order to keep our lab clean,” she said. “So I knew we had the components to make hand sanitizer, and we decided to start.”

They began by hand-bottling a small batch, which sold out in hours. Beginning to receive inquiries from local businesses and mining operations in the region, Kivisto realized demand outstripped their ability to keep up.

Meanwhile, Sleeping Giant Brewing Company cofounder and CEO Andrea Mulligan was considering how her own company could help.

“We were inundated with phone calls and inquiries,” she said, partly fueled by stories of other breweries converting their operations to produce sanitizer. Many of those are also distilleries, Mulligan said, allowing them to produce a high enough alcohol content to create the product themselves.

Sleeping Giant may not have that capability, but they do have the equipment to produce and package it in large quantities, given the right ingredients. That’s where Kivisto and Microbiate came in.

The company managed to secure large amounts of the needed components: isopropyl alcohol, hydrogen peroxide, and glycerol. Kivisto said those are becoming harder and harder to come by.

“It’s brutal,” she says. “We happened across this large supply, but honestly it was just kind of lucky timing – right call, right time.”

The brewery obtained a license to produce hand sanitizer, which is valid through March of 2021. They plan to begin producing this week, following the World Health Organization’s recommended recipe, with enough supplies for a first batch of about 20,000 litres.

Brewery staff agreed to work extra hours to produce the sanitizer, while the company continues brewing its more usual products. Mulligan said the new project was a learning curve that required some staff training, and that the partnership with Kivisto and Microbiate was key.

“We just tried to stick with what we’re good at and what we know, since this is definitely branching out from what we normally do,” she said. “But we’re good at making beer, packaging beer, and distribution. So we’re taking our strengths and using those to help us do this project.”

The City of Thunder Bay’s head of supply management, Dan Munshaw, credited the project as one local effort that has helped the city address supply issues.

“If you had asked me ten days ago, we were scrambling to find hand sanitizer,” he said. “Now we’ve got good suppliers who have stepped up to the table.”

Along with their institutional customers and sales to the public, the brewery will make sanitizer available free to a number of local non-profits like the Regional Food Distribution Association, Roots to Harvest, and the Dew Drop Inn.

The brewery planned to launch pre-orders for the public Sunday evening. The sanitizer is packaged in the brewery’s 473 millilitre tall cans and will be available for purchase online only at their website, with contactless pickup at the brewery.