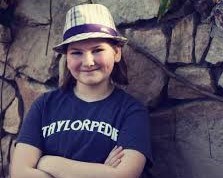 Gorrie noticed the actor, who played fan favourite Dwight Schrute on the popular show, had been offering to hold live conversations with fans to bring some much-needed cheer during the COVID-19 pandemic.

“I thought that was really awesome to have someone that is also trying to bring happiness while this whole thing is going on,” she says. “So I just sent a message.”

“I may have cried,” says Taylor, a big fan of the actor, and The Office in particular. “I got very, very excited, and was very surprised.”

What followed on Thursday was a nearly 13-minute interview in which Wilson alternated between wry humour and sincere reflections on the pandemic and how it’s affecting people. The comedian took an immediate shine to Gorrie’s hometown.

The actor also used his signature humour to remind viewers about the importance of physical distancing.

“Don’t get within the distance anyone could hit you if they had a two-handed broadsword,” he advised.

For Gorrie, the interview was a surreal but joyful experience that also helped bring a new audience to her show.

“I was shocked I was actually talking to him,” she says.

Gorrie was particularly touched by kind words the actor passed on about her efforts.

“You could think of your show right now as a really great service to people” during the coronavirus pandemic, Wilson told her.

“When he was telling me I was doing something good and I should keep going on, I almost started crying,” she said.

In the coming weeks, Gorrie says she’s lined up a number of interviews with local businesses. She plans to ask them about how the coronavirus has affected them and how people can help, but with a healthy dose of good humour. The young media personality has no plans to stop anytime soon.

“I have so much fun doing interviews,” she says. “I want to meet more people with it.”