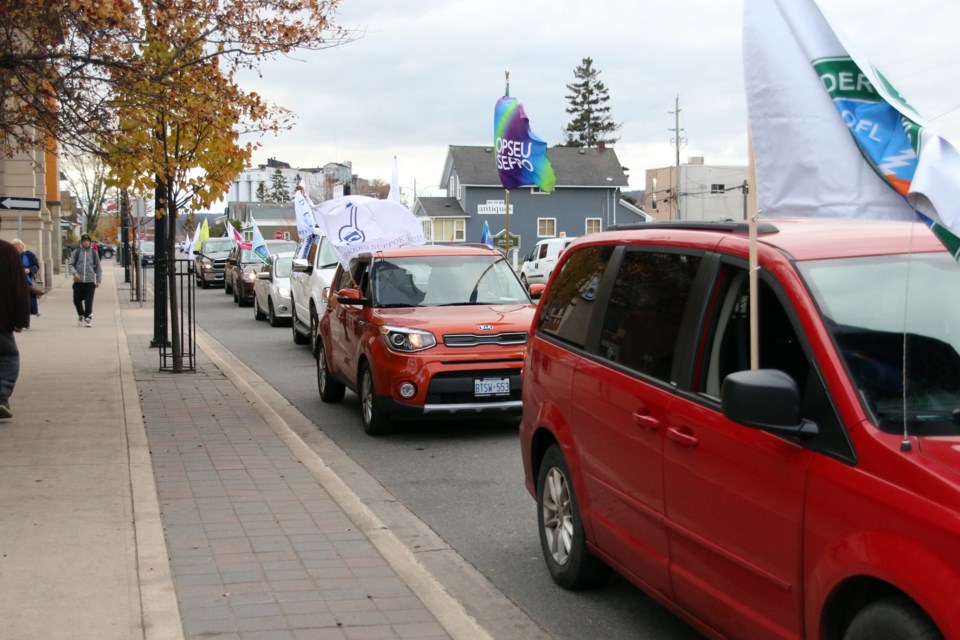 Members of various labour unions drove around Thunder Bay city hall in solidarity with a larger protest outside Queen's Park against cuts by the Ford Government.

THUNDER BAY - Labour unions across Ontario welcomed Premier Doug Ford back to Queen’s Park for the return of the legislature after not sitting for more than five months to remind him that cuts by his government have not gone unnoticed.

“We are here today to let Doug Ford know and his conservatives that we are still here after his little hiatus, the Where’s Waldo moment, gone missing for five months that he was in hiding basically in my opinion,” said Ed Arvelin, regional vice-president with the Ontario Public Service Employees Union

On Monday, labour unions held a large demonstration outside Queen’s Park and rallies in communities across the province were held in solidarity.

“This rally today was an impromptu decision to show solidarity with the people who are welcoming Doug Ford at Queen’s Park in order to demonstrate and send a message that people are unhappy with the cuts that are happening for the last six months and we are not going to take it any longer,” said Carlos Santander-Maturana, president of the Thunder Bay District Labour Council. “We are going to push back and do whatever it is to keep the pressure on the government.”

For union leaders in the north, cuts to health care, education, autism services, and correctional services are having a significant impact on people across the region.

“I think the ones who are impacted the most are the health and education issues,” Santander-Maturana said. “Those are the big bills the government has to pay, so the impact of health cuts are going to affect everyone in the city.”

Arvelin added the elimination of the province’s bailiff program, as well as cuts to autism services, have been particularly devastating for people in remote and rural communities and there has been no consultation with the people living in the region.

Former president of the Unifor unit at Bombardier and former city councilor, Paul Pugh, said the cuts by the Ford government have also hurt people living in poverty.

“The message today that we want him to change course. We want him to take into consideration the interests of the poor,” he said. “We want to send a message along with other people that we hope this session of the legislation will be more positive for working people.”

Pugh added that the protests taking place across the province are reminiscent of actions taken against the Mike Harris government in the late 1990s.

“In the long term, my experience tells me that they do make a difference,” Pugh said. “Will they make a difference next week, probably not. But if they keep adding up, city by city and protest by protest, even if the premier doesn’t want to listen, some of the members of his caucus and advisors will realize it will be difficult days trying to get reelected.”

“This is how democracy works,” Santander-Maturana added. “You have to demonstrate and let them know that people are unhappy.”

Thunder Bay not included in pharmacy COVID-19 testing
Sep 23, 2020 2:30 PM
Comments
We welcome your feedback and encourage you to share your thoughts. We ask that you be respectful of others and their points of view, refrain from personal attacks and stay on topic. To learn about our commenting policies and how we moderate, please read our Community Guidelines.
The latest on COVID-19 Local and global updates →