Concerns over hours do not directly affect local workers, but plumbers and steamfitters are striking in solidarity with Southern Ontario workers.
Jun 4, 2019 5:34 PM By: Michael Charlebois 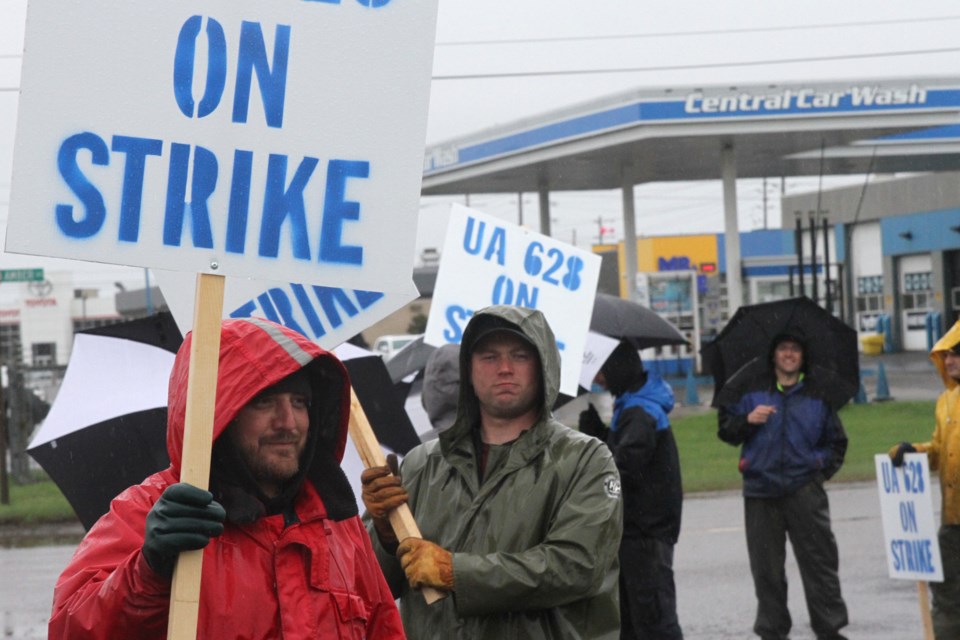 Lucas Szwajda was one of 325 local plumbers and steamfitters striking in the rain on Tuesday, June 4, 2019. (Michael Charlebois, tbnewswatch)

THUNDER BAY -- For the first time in 30 years, local plumbers and steamfitters are on strike.

Workers represented by Local UA 628 took to the picket line on Tuesday, as part of the province-wide strike, which began on Monday, by the Ontario Pipe Trades Council.

The about 325 local workers, who are joining their colleagues across Ontario, are striking against the provincial contract set out by the Mechanical Contractors Association of Ontario

“They are going against our hiring practices and hours of work,” said Lucas Szwajda, a worker at Thermal Mechanical.

The key issue in the province-wide strike is the negotiation of the work week, with the Mechanical Contractors Association of Ontario said to be attempting to eliminate the existing four-day, 36-hour schedule and replace it with a five-day, 40-hour work week.

“In our collective agreement, there is a clause where the business managers can talk to the local contractors and get the 40 (hours) if they agree on it mutually. But they choose not to invoke that clause and just want provincial control all around,” he said.

Szwajda said local plumbers and steamfitters already work under a 40-hour schedule but are striking in solidarity.

“We’re standing strong with our brothers down south,” he said.

Workers voted last week to overwhelmingly reject an offer tabled by the MCAO.

The sector joins Ontario’s sheet metal workers, who have been on strike for over four weeks striking for similar concerns.

Local 628 members plan to set up picket lines across the city for as long as negotiations are at a standstill.

More than 12,000 workers are on strike province-wide.