Return of the NHL and NBA should be a boon to business, says Wacky's general manager, cautioning there are gathering restrictions in place.
Aug 1, 2020 7:18 PM By: Leith Dunick 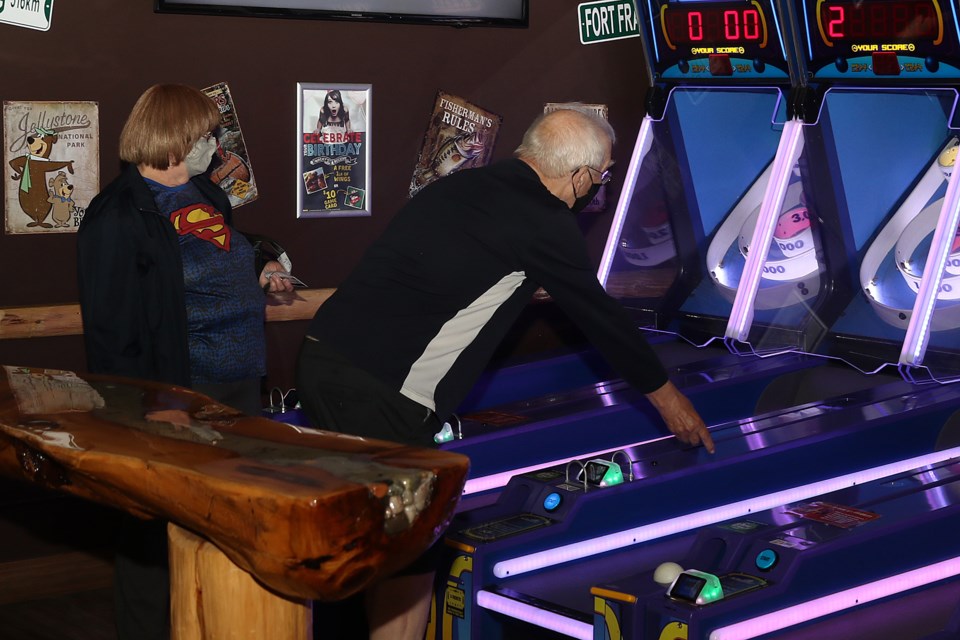 Wacky's customers are already enjoying the sports bar's arcade, and are expected to flock to the Thunder Bay location on the weekend with the return of the NBA and NHL. (Leith Dunick, tbnewswatch.com)

THUNDER BAY – The return of hockey – and live sports in general – should be a boon for sports bars across the country.

Locally, Adam Balfour is counting on it.

Balfour, the general manager at Thunder Bay’s Wacky’s location, said he was getting phone calls days in advance for reservations on Saturday, when both the National Hockey League’s play-in series begins and the Toronto Raptors resume their chase for a second straight National Basketball Association championship.

“I think it’s really important for any sports bar, in particular any restaurant that’s formatted any way like we are,” Balfour said. “Sports has always been a massive part of our business here. We have the biggest TVs in Northern Ontario in our lounge, so obviously when the sports hits, we are the No. 1 place.”

The popular sports bar should have a full weekend ahead.

The Montreal Canadians open their best-of-five series against the heavily favoured Pittsburgh Penguins on Saturday night at 8 p.m., while the Toronto Maple Leafs will attempt to avoid being tossed into the Alexis Lafreniere lottery pool on Sunday night at 8 p.m. when they open against the No. 9 seed Columbus Blue Jackets.

Calgary, Vancouver, Edmonton and Winnipeg are also taking part in the play-in round, adding to the hockey excitement.

The Raptors, meanwhile, restart their 2019-20 campaign from the NBA bubble in Orlando, taking on LeBron James and the Los Angeles Lakers, the odds-on favourite to advance to the finals from the leagues’ Western Conference, at 8:30 p.m. They also play the Miami Heat on Monday and the Orlando Magic on Wednesday.

The Toronto Blue Jays are also back in action, posting a 3-2 record in their first five games since MLB restarted, playing games six days a week.

Balfour cautioned would-be spectators that it won’t be quite the same as in the past. The restaurant has taken plenty of precautions, including hiring extra staff to clean the restaurant and the games room, which has been reconfigured to allow for maximum social distancing measures.

“It’s exciting that the sports are coming back and we’re already getting phone call after phone call,” Balfour said. “But once again, the care we have to take to maintain that social distancing, I think back to those Raptors games when we were packed and people were crowded together.

“Obviously we can’t be doing that anymore. We’re going to be working really hard to get as many people in here as possible, but also make sure that everybody can have a safe time and everybody feels comfortable.”

Restaurants and bars are limited by gathering restrictions put in place by the provincial government.