Three teams, including the Phillies, Indians and Giants, have expressed interest in the lanky right-hander, whose fastball hit 97 miles an hour at the Major League Dreams Showcase earlier this month.
Aug 12, 2018 6:02 PM By: Leith Dunick 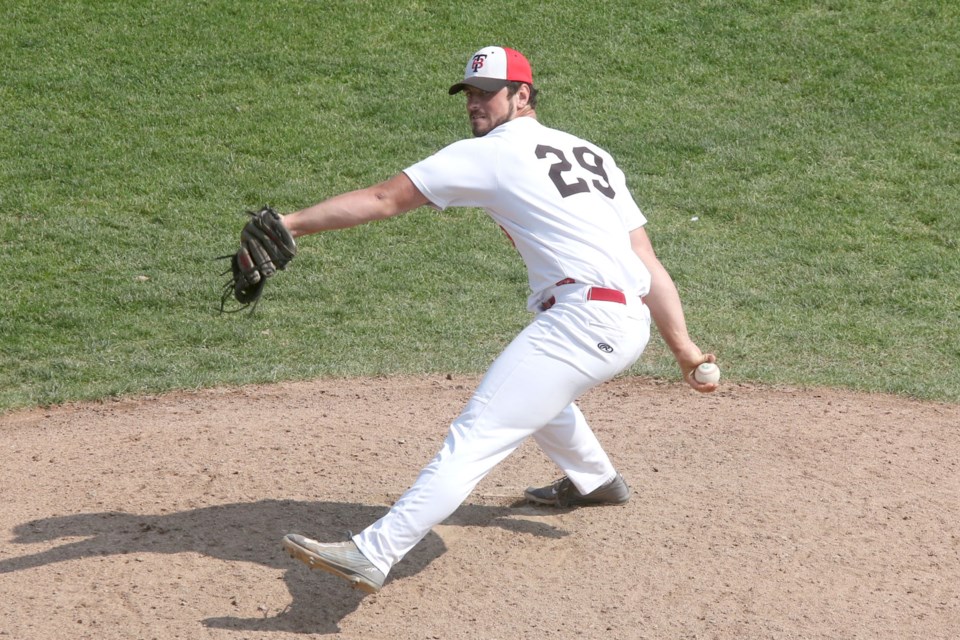 Omar Maldonado was 0-4 with an 11.73 ERA for the Border Cats in 2018, but his 97 mile-an-hour fastball has drawn the attention of major league scouts. (Leith Dunick, tbnewswatch.com)

THUNDER BAY – Judging the Thunder Bay Border Cats season on the numbers alone would be a major mistake.

They won just 22 times in 72 games and wound up last in the Northwoods League in attendance for a second straight season – despite enticing 68 more fans a night to Port Arthur Stadium in 2018 than they did a summer earlier.

But in a summer college league, oftentimes wins and losses are inconsequential.

It’s a developmental circuit, and on that note, the Cats did a fantastic job.

The team sent four players to this month's Major League Dreams Showcase, and all four are expected to get a serious sniff at professional baseball.

The first to go could be starter-turned-reliever Omar Maldonado, who is being courted by three teams – the Philadelphia Phillies, the San Francisco Giants and the Cleveland Indians – and could sign as early as this week.

A former catcher who only took up pitching this past season, there’s no question the Redondo Beach, Calif. right-hander struggled with his control, especially early in the season while in the Border Cats rotation.

His control got better as the summer went on, however, which he says was the result of confidence.

“My ability to compete at this level, I’ve always wanted to play in the Northwoods League. I’ve always felt this was a dream place to play because it’s so competitive day in and day out,” he said on Sunday, after the Cats fell 7-1 to Willmar to round of their 16th campaign.

“I think it took me a while to realize that I do have the ability to play at this level and that not a lot of people are going to be better than me.”

It was his fastball that drew the interest at the recent showcase, Maldonado hitting 97 miles per hour on the radar gun.

In today’s climate, with teams taking the ball from their starters after five innings, the ability to be a one-inning specialist with plenty of heat is more than enough to catch the attention of scouts.

Moving to the bullpen helped, he said.

“You can’t start a game and continue to walk guys. Obviously that’s not what you’re supposed to do as a starter. You’re supposed to go out there and attack. And I felt the bullpen helped me out because I can go out there for one or two innings and give it my all and not be worried about it,” said Maldonado, who still has a year of eligibility left at Iowa’s Graceland University should a pro deal fall through.

“When you start, you’ve got to pace yourself the whole game and I don’t think I was prepared for that.”

Maldonado said it was his coaches who convinced him to stop donning the tools of ignorance and focus on his pitching.

“It wasn’t my decision,” he said, smiling. “I actually told my coaches I wanted to end my career as a catcher, but they said, ‘We’re not going to let you end it. We know you have potential to maybe pitch at the next level, so we’re just going to put you out there. This last year I’ve fully committed myself to pitching and I’m just going to continue to develop and get better.”

Manager Mitch Feller, who said the Phillies appear to be the front-runner, said after he signs, it’ll be up to Maldonado to make his mark.

“You never know what’s going to happen, once he gets there.”