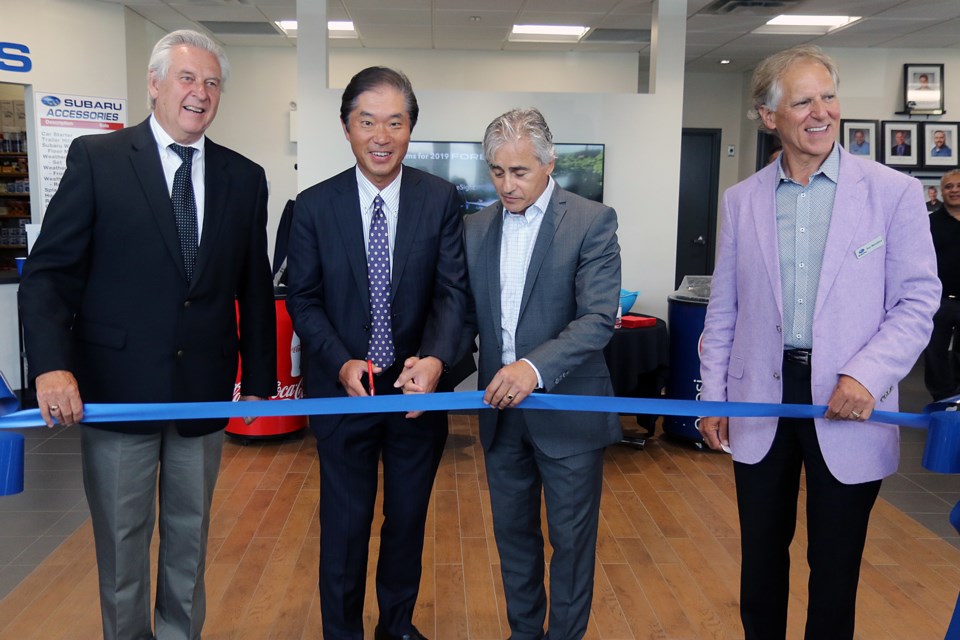 Ron Marostica was one of the original owners, opening a dealership in Thunder Bay.

“We’re a lot bigger,” he said on Monday, at a ribbon cutting ceremony that brought seven executives from Subaru Canada, including president and CEO Yasushi Enami.

“We’re twice the size of what we were before and we’re very environmentally friendly. The building, the front and the side of it is complete glass, so we get solar passive heat coming in. We have an in-floor heating system that makes it very comfortable for our workers and our customers when they are here.”

The new site is much more user friendly, he added.

“It’s very inviting,” Marostica said. “From the outside they can see all the cars on the inside because there is so much glass. And we’re the only facility in town, where if someone actually wanted to, they can sit outside the window and watch their car being worked on by licensed technicians.”

Don Durst, senior vice-president of operations for Subaru Canada, said the new dealership is a key link for the company, given its location on the Canadian map.

To the west, the nearest dealership is Winnipeg and to the east, it’s North Bay.

“So for anyone traveling across the Trans Canada Highway, this is a very critical point for us, if there is an issue with a vehicle or people on holidays or traveling,” Durst said.

“You can see all the brands are in Thunder Bay.”

A new facility is also inviting to the vehicle-buying public.

“We want to have things that are practical, environmentally friendly and it feels welcoming when you walk in,” Durst said. “To see 100 per cent of the service area covered in glass, to me that opens up a huge amount of transparency that customers say, ‘I think you’ve got to trust that.”

Mayor Bill Mauro was also on hand for the ceremony, and said seeing the private sector investing in the city is a good sign.

“We’re really happy about this. This was a big brown field for a long time. As a city we’re all working together to try to build a community that people are proud of, that they want to live in and stay in and that new people want to come to,” Mauro said.

Marostica, who is bringing brother Jim and son Kevin aboard as partners, said he’s increased his employee count by four, to 22, with the move, adding they’re still looking to add more staff.

Marostica said he's hopeful his other dealership, the Used Car Superstore, will be open by the end of August at its new location on the former Greyhound bus station property.