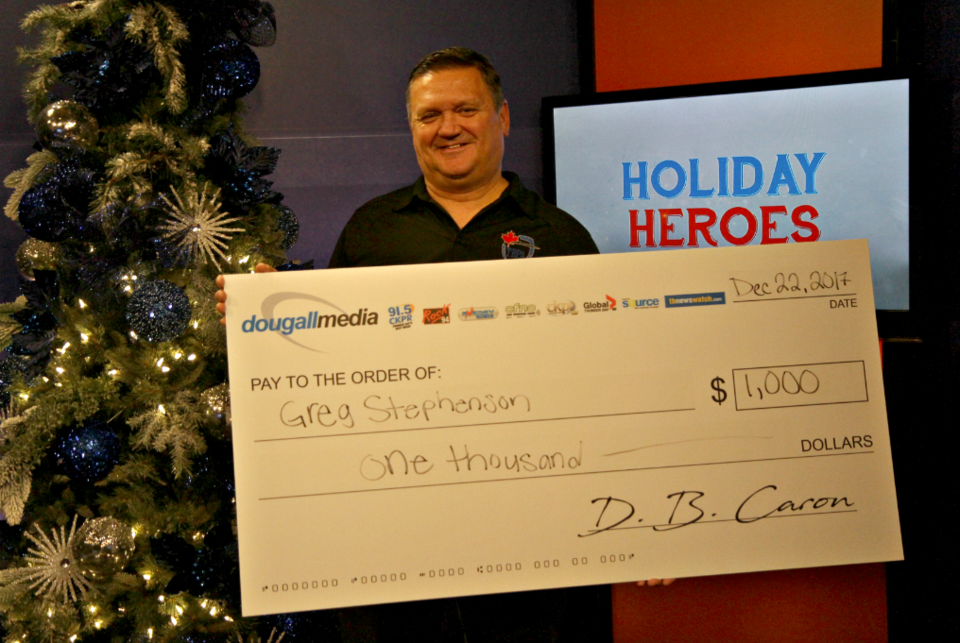 THUNDER BAY -- The season of giving doesn’t only come once a year for Greg Stephenson.

From January through December, Stephenson plays active role in the community as a police officer, Parade of Lights chair and volunteer. The inspiration of his story led to hundreds of votes being cast on tbnewswatch.com in his name, and more than 350 shares of his story through Facebook and Twitter.

As the holiday hero winner, Stephenson receives the title of this year’s Holiday Hero and a $1,000 cash prize.

“It’s an honour to be recognized by your peers,” Stephenson said after being told his story garnered an inspired following. “Just to be able to sit here and say that my peers, friends, coworkers and family thought that I was deserving. This award makes it all that more special.”

For more than 20 years, Stephenson and many other police officers and emergency service personnel raise funds in the fight against cancer by organizing the Canadian Cancer Society Cops for Cancer event.

“It’s just a phenomenal event we put on every year,” he said. “There’s just lot’s of volunteers behind the scenes helping us out and this year was a very successful year.”

The 2017 Parade of Lights was one of the Thunder Bay Police Association’s best yet, Stephenson said.

“The show is great and we had lots of people and we were very pleased about it,” he said.

“It’s nice to see how many people are out there and to hear the feedback about how they enjoyed it and to be able to give the money to the four charities that do awesome work around the community.”

Stephenson said he is just one of many people in Thunder Bay who gives back to the community.

“The people of Thunder Bay are awesome. I mean the generosity, seeing Toys for Tots and Christmas Cheer fund and how they reach their goal and how we reached our goal for the parade of lights,” he added.

Volunteering is something Stephenson loves doing, but he couldn’t do it without the support he receives from his coworkers, family and volunteers.

“There’s so much work that goes behind the scenes. Volunteers of both events, I mean any kind of event that the Thunder Bay Police Association is involved in it’s the volunteers behind the scene,” Stephenson said.

“I’m just the person that gets to be in the media, it’s all the people behind the scenes that make my job easy.”