THUNDER BAY -- Lindsey Lesage instinctively caught the disabled man in front of her when he fell unconscious 30 minutes into Tuesday afternoon's lineup for those collecting social assistance and disability cheques.
0
Aug 30, 2016 5:11 PM By: Jon Thompson 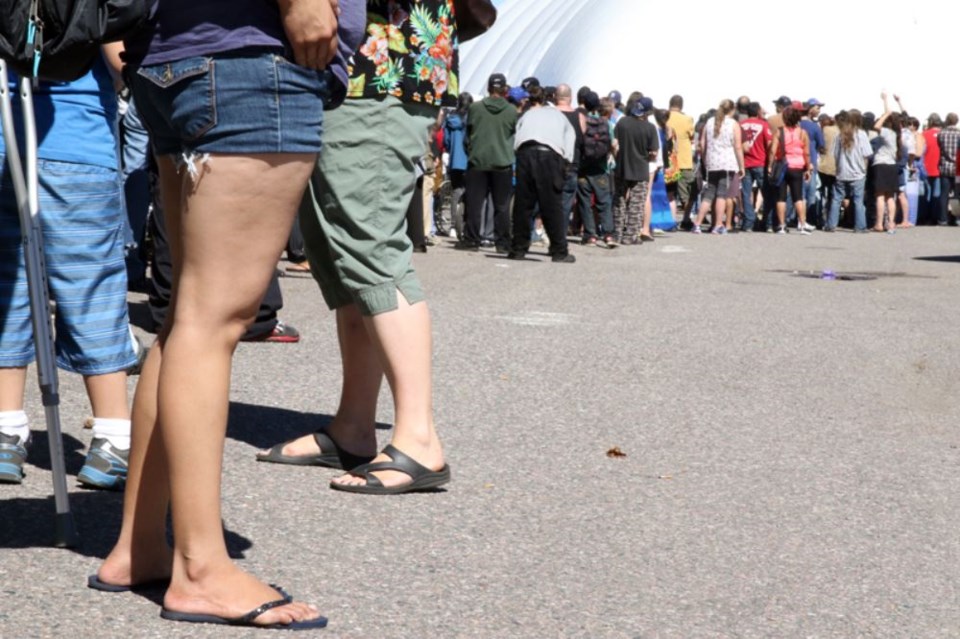 THUNDER BAY -- Lindsey Lesage instinctively caught the disabled man in front of her when he fell unconscious 30 minutes into Tuesday afternoon's lineup for those collecting social assistance and disability cheques.

She dragged him into the shade of a CLE building while a stranger overturned a bucket where he could sit and another produced a thermos of water.

Lesage looked down the line until it turned the corner.

There were 1,000 people between them and the Coliseum Building where the Thunder Bay District Social Services Administration Board  and the Ontario  Ministry of Community and Social Services had established a depot to avoid the cheques being caught in a postal union strike action that didn’t happen.

“This is not set up right,” Lesage said.

“There are too many people out here who aren’t wearing hats with little kids. No one is prepared for this.

“There shouldn’t be thousands of people out here. Nobody knows what they’re doing – how many hours we’re going to be out here. How come there’s not a single thing of water, a single portapotty? Nothing.”

The lineup had been cut in half by 2:30 p.m. when an ambulance was called to assist another man who had been waiting in the line through the afternoon sun.

Chris Mather was a social worker before her physical disability made it impossible to continue working.

“Where are the seats for us to sit down? Where’s the water for us to drink? If you’re not on disability, people on OW shouldn’t have to stand in the heat with no consideration, whatsoever,” Mather said.

“It’s economic forces that make us have to be on OW or ODSP, not some character deficiency.”

April Cochrane crossed paths with her neighbourhood postal worker as she left her home to collect her cheque. Without enough money left to take the bus to the CLE grounds, she was waiting for her mother to give her a ride.

“The mailman walked right by me today and came to my mailbox,” she said.

“It doesn’t make sense to me. They should have waited.”

Fifty-eight per cent of those receiving DSSAB assistance have direct bank deposits but 1,200 others will have to collect cheques at the CLE between Tuesday and Thurdsay.

As George Gilbea took shelter under a tree, he considered joining their ranks.

“People have got to get with the times,” Gilbea said.

“I keep reading about that. You have to have your bank account and stuff like that. I’ve been told this for months now. It saves you the hassle that people don’t have to mail stuff out.”

She stood behind the decision to establish the depot in light of uncertainty with potential labour disruptions at Canada Post.

“I went in the line a bit before we opened. I’ve gone out occasionally and I’ve been meeting people at the door,” she said.

“People have been pretty good, not really short-tempered. I’m checking in with them as they leave and they seem to all be OK.”