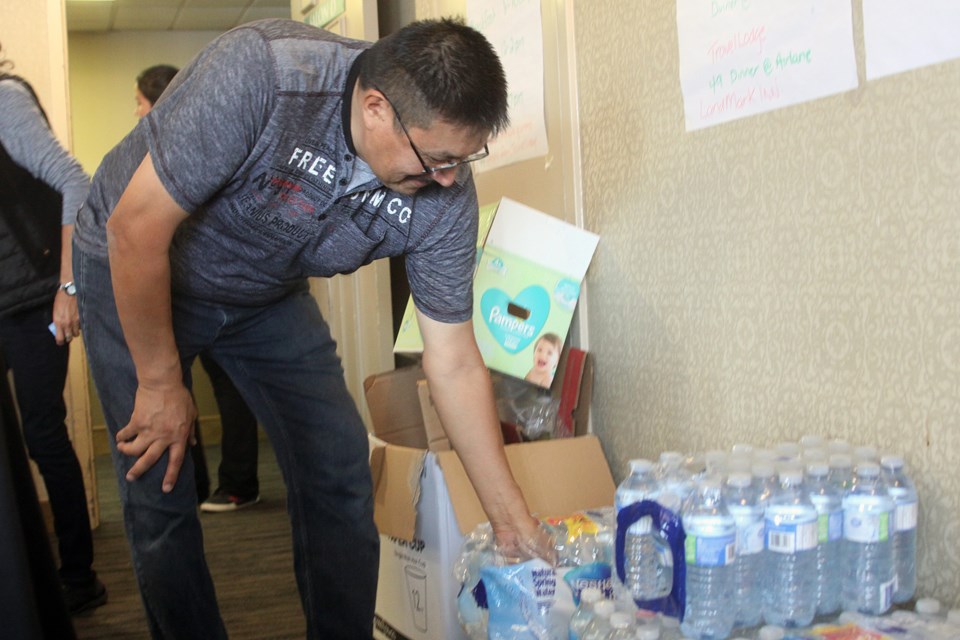 Neskantaga councillor Allan Moonias grabs a bottle of water from a meeting room in a Thunder Bay hotel on Tuesday, September 17, 2019 (Tbnewswatch file)

THUNDER BAY — About 200 residents of Neskantaga First Nation living in Thunder Bay for the past week after the leadership declared a state of emergency are starting the journey back to their home community.

The first flight was scheduled for late this morning.

According to a statement issued by Nishnawbe Aski Nation on behalf of Neskantaga, laboratory tests on water sampled on Sept. 18 and 19 from various locations in Neskantaga's distribution system showed the water quality is "acceptable."

"All required conditions have been met to guarantee that the drinking water supply is of an acceptable microbiological quality," the statement said. "The water samples...showed the chlorine residual at a level in accordance with the current legislation."

Neskantaga has now lifted its Do Not Consume water advisory but its longstanding Boil Water Advisory will be reinstated.

The state of emergency was declared after a water pump broke down, and a back-up pump also failed, leading to contaminated, unfiltered water entering the distribution system.

Some residences were left with no water supply at all.

"We are happy to be finally going home after a long week away," said Chief Christopher Moonias.

"I would like to thank our people for the strength they've shown, and the individuals and organizations that have helped and supported us along the way," he added.

The band council ordered the evacuation on its own after the federal government declined the request on the basis that it expected repairs to the pump would be completed within a few days.

A spokesperson for Indigenous Services Canada said the department was offering assistance in the interim to community members who stayed in Neskantaga, and was offering help as required for those residents transported to Thunder Bay.

In Monday's statement, Chief Moonias said he hopes the government "follows the lead of our people and supports our community in overcoming this difficulty as well as the continued battle we experience with the 25-year boil water advisory."

Neskantaga has been on a boil water advisory since 1995, the longest such advisory in Canada.

A new water treatment plant was expected to be completed last year, but is now scheduled to go into service next month.