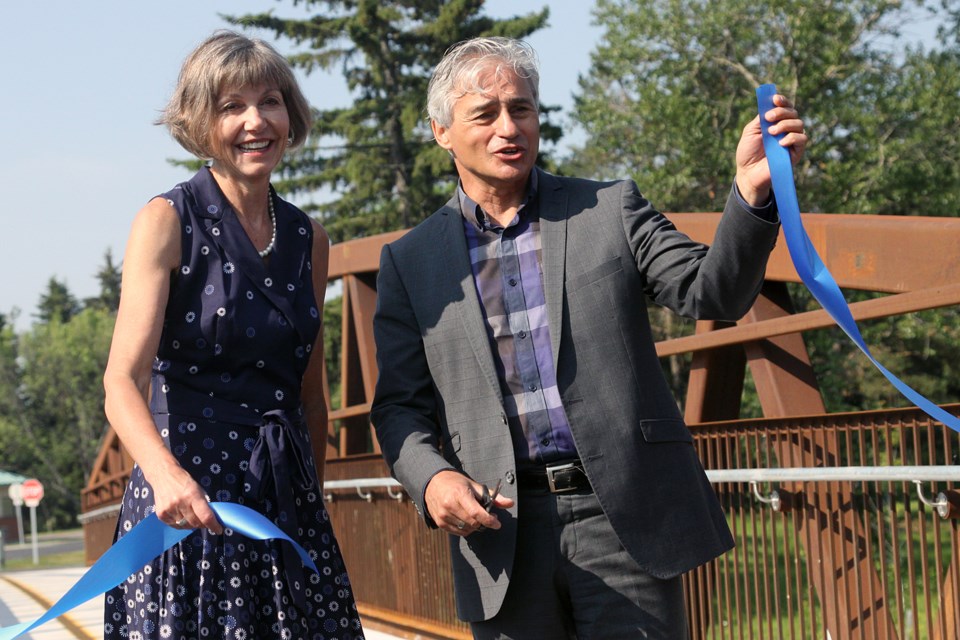 Confederation College president Kathleen Lynch and Thunder Bay mayor Bill Mauro celebrate the opening of a new multi-use bridge on the college campus that is expected to serve as an active transportation link for the city on Monday, July 8, 2019. (Matt Vis, tbnewswatch.com)

THUNDER BAY – A new multi-use bridge and recreational trail extension that will connect multiple routes across the city is now available to cyclists and runners.

The bridge, which crosses the McIntyre River on Confederation College campus and is separated from the roadway, was officially opened with a ribbon cutting on Monday.

The $1.2-million project, which was originally announced in 2016, included $325,000 from the former Liberal provincial government with the remainder paid by the city. Construction of the trail began in 2017 and the project was finished earlier this year.

Kayla Dixon, the city’s director of engineering and operations, said the bridge establishes one of the connections needed to fill gaps within the trail system.

“We have a lot of users that travel between the college and the university, and then head north and south from there,” Dixon said, adding it’s a nice pathway for people whether they are commuting or using it for recreation. “This really does provide a safer connection for them now.”

The new span is alongside the recently rebuilt Nakina Drive vehicular bridge, which previously had an area for pedestrian and cyclist traffic. The extended trail runs through college property east of Golf Links Road to the Harbour Expressway intersection, connecting with the existing Matson Trail that forms a link north to the River Terrace neighbourhood. It also provides access to established routes that reach other areas of the city, including Parkdale to the west and intercity to the east.

Thunder Bay mayor Bill Mauro, who announced the provincial commitment when the project was first presented more than three years ago, was back to mark the opening of the bridge and trail.

“I think where we can and where we’re able to find the dollars to continue to enhance, support, broaden or expand that it’s a good use of tax dollars,” Mauro said. “A recreational trail system is fundamental to having a wholesome community.”

“This movement to try to encourage people to simply be more active and take better care, I think is a good thing,” Mauro said. “This is just making it easier for people to get out there and do that.”