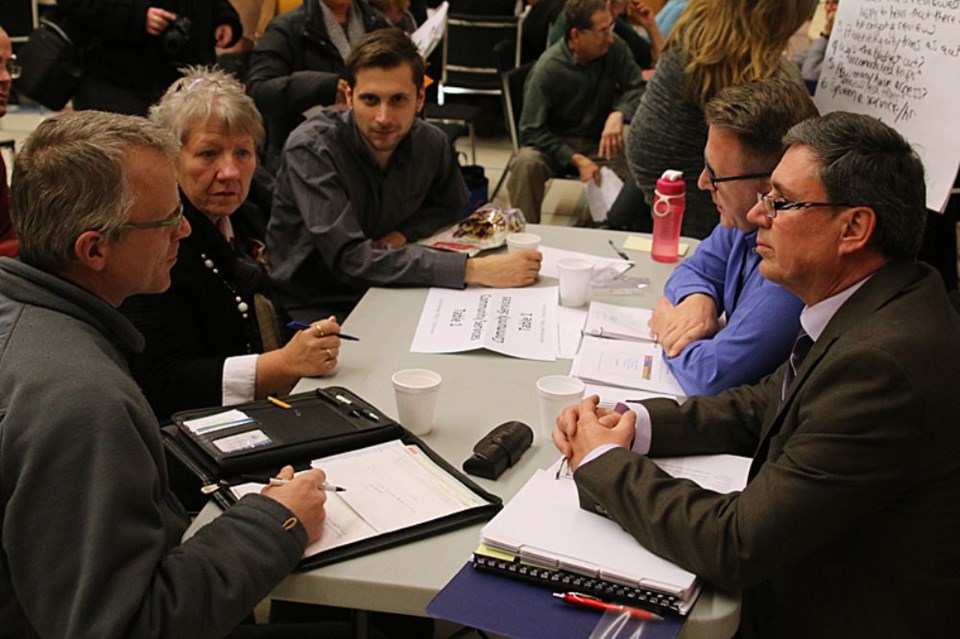 Members of the public got a chance to sit down with city administration during a pre-budget consultation meeting held Thursday evening at the 55 Plus Centre. (Matt Vis, tbnewswatch.com)

The city hosted an open pre-budget public consultation sessions at the 55 Plus Centre, allowing attendees to sit down with a number of department managers to express concerns and receive clarification on a number of issues.

“It’s time more citizens got informed,” said McKellar ward resident James Gibson. “It is important people start understanding what city politics is all about and how it works.”

There was some disappointment from the originally assembled crowd, with a handful exiting the room after learning there would not be an open mic portion to directly question senior administration and city council.

Those that stayed were able to proceed from department to department throughout the room, talking to councillors and city officials such as city manager Norm Gale.

“This way you have a chance to talk to an individual who is responsible in that area who can give you a good idea of what’s going on. Yeah, we have problems but we have knowledgeable people who can explain the situation,” Gibson said.

“Our members are concerned about the 3.83 per cent tax levy increase (to existing taxpayers). They’re really feeling the pinch of the slowing economy and rising costs and are quite concerned about that much more in taxes potentially being added on to their business,” she said.

“What we’re hearing is businesses could manage around 2.5 per cent but that 3.83 is really a tough number to swallow.”

In addition to the proposed levy increases, businesses are also feeling the hit from a slowing economy and plummeting Canadian dollar which has significantly increased costs.

That combination has made it difficult for emerging businesses to become viable and for established businesses to remain sustainable.

“It’s kind of a perfect storm. It’s not all locally in control but I think city council needs to take those broader economic factors into consideration of what’s affordable and what’s the tipping point and I think we’re getting pretty close,” Robinson said.

Budget chair Coun. Frank Pullia said the session was about finding a different way to present information to members of the public and deliver an opportunity to provide input.

“People want to see reasonable tax increases and want to understand their concerns are being heard. Those are the two key things I’m hearing,” he said. “We started that process of dialogue with our citizens. This format is basically taking city hall to the people with a slightly different approach.”

The feedback will play a role in council’s upcoming budget deliberations.

“The information will be collected, compiled and be provided to council for our consumption. We have already been receiving information online from people who couldn’t make it,” Pullia said.

“They’ll be part of the decision making process. All of us as an elected official have a responsibility to listen but also make decisions. We’ll take everything into account. It’s not just one item, we have to hear from everybody.”