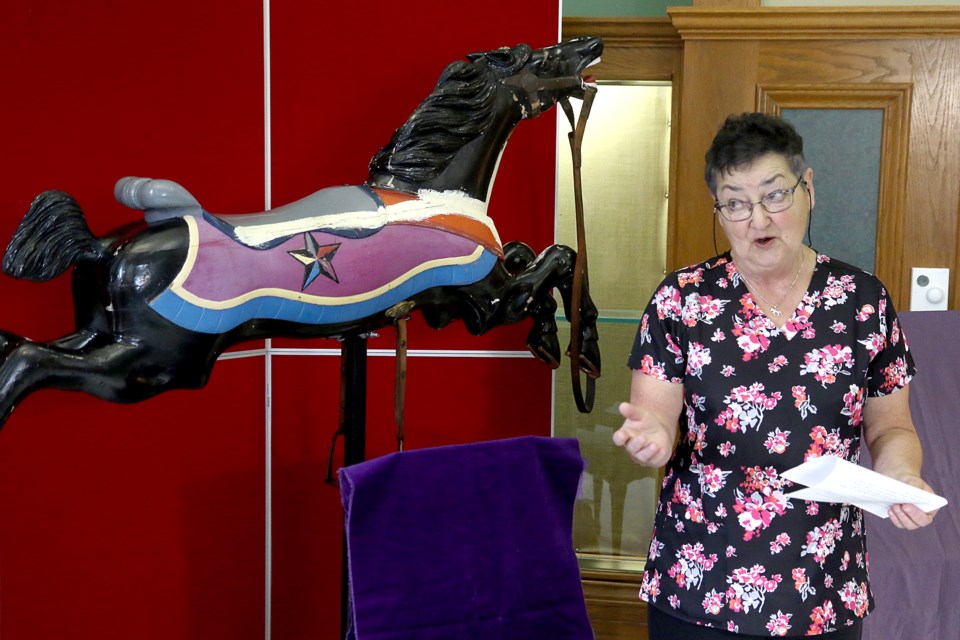 Nipigon's Ava Walter wins Save the Carousel committee draw and right to name of the soon-to-be restored horses after her grandmother, Marie Brunner. Her choice was unveiled on Tuesday, Nov. 19, 2019 at the Thunder Bay Museum. (Leith Dunick, tbnewswatch.com)

THUNDER BAY – When Nipigon’s Ava Walter was a much younger woman, she ran away to join the Calgary Stampede, where she helped cool down the horses after their races.

It shouldn’t have come as a surprise. She’s been a horse fanatic all her life.

On Tuesday, as the winner of the Friends of Chippewa Park Carousel Restoration Project, Walter combined her love of horses with her love of family.

Walter was unveiled as the winner of the organization’s Name the Horse contest, a fundraising event designed to help cover the restoration cost of the 104-year-old carousel.

She chose the name Brunner, named after her grandmother, Marie Brunner, who immigrated to Canada in 1906, but as an only child, was the last of her family to bear the name.

She got the news last week.

“I was driving in the car at the time and I didn’t recognize the phone number or the name. When she told me my name had been drawn to name the horse, I just immediately became emotionally a disaster,” Walter said after a ceremony announcing her triumph at the Thunder Bay Museum.

“I started to cry and I had to pull off the road. I’ve always been a lover of horses and when I paid my $20 for the 10 tickets that I put in, I thought I’m not going to win, but that money is going to go to restore something on the carousel.”

The idea for the draw came in the midst of a fundraising campaign aimed at restoring all 28 horses on the historic carousel, one of just a few of its kind left in the world today.

Project co-ordinators estimate it costs about $20,000 to restore each of the horses, and while the draw won’t raise that much, it brought in a good dent toward the total needed to return Brunner to her former glory.

Donna Gilhooly, co-chair of the Save the Carousel committee, said the draw gave everyone in the community an opportunity at a chance to name one of the horses, which until now had been left in the hands of corporate donors or deep-pocketed individuals who gave to the campaign.

Gilhooly said the name will last for generations and it was important to allow the public to take part in the process.

“I think the carousel is part of our collective memory,” she said.

“We’ve all ridden the carousel and it is probably one of our most valuable cultural assets in the community. Let’s save it, let’s protect it, let’s restore it for generations to come. It’s a beautiful thing. It’s like an interactive museum.”

Gilhooly said they couldn’t have hand-picked a more deserving winner.

“If we had a 3-D printer or a magic potion, we could not have created a better winner than Ava Walter,” she said of Nipigon’s 2018 citizen of the year.

The name will be commemorated with a plaque at the base of the horse on the carousel, which backers hope will be fully restored by next spring.