KAKABEKA FALLS, Ont. – Ontario’s Progressive Conservative party leader is touring Northern Ontario with hydro rates at the top of his agenda.
Aug 22, 2016 11:50 AM By: TbNewsWatch.com Staff 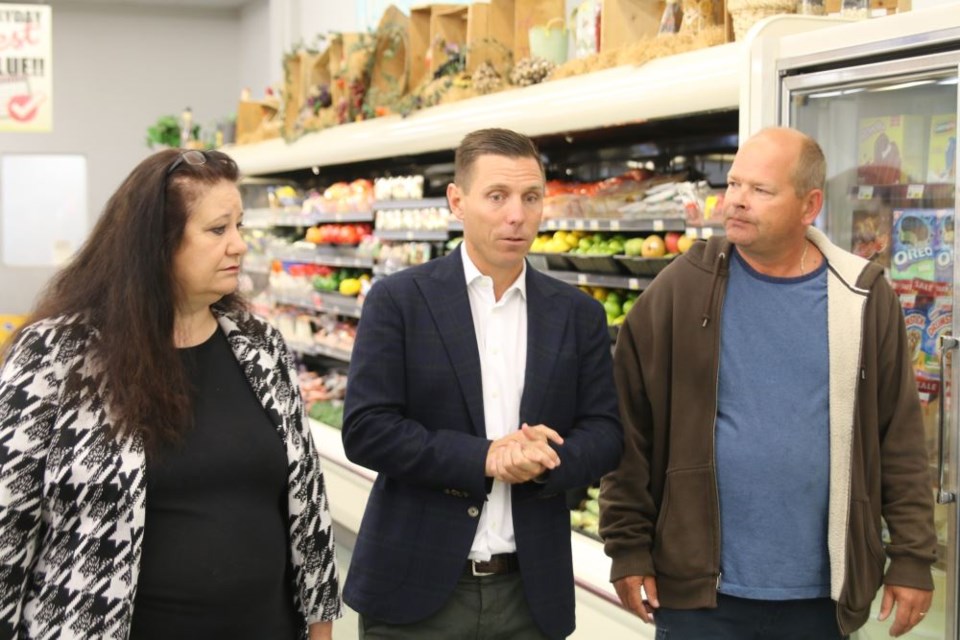 Patrick Brown was in Kakabeka Falls Monday meeting with local business owners to discuss what he calls a hydro rate crisis.

According to Brown, the Ontario government is living in a fantasy land and unwilling to admit that high hydro rates are negatively affecting families and business owners.

“I think it is particularly problematic where the hydro crisis is more egregious. It’s a mess in Southern Ontario, too, but up here not only do you have skyrocketing hydro rates, but the government hasn’t invested in the transmission infrastructure.

“So you get shoddy infrastructure and you have skyrocketing hydro rates. It’s almost a double whammy of hurt for Northern Ontario.”
Brown toured the Odena Foods grocery store in Kakabeka Falls with owner Kent Maijala, as well as the manager of the Kakabeka Hotel, Marlins Bommes-Dudzinski.

Maijala said that during the summer his hydro bill is, on average, $13,000 a month.

“At $13,000 a month to run a small business it makes it really hard to make ends meet,” Maijala said. “Summertime is the busy time of year when the tourism is around and obtainable then, but we have to ensure that our summer is busy enough to have us get through the winter to pay our bills.”

On average, the cost of hydro during the winter months is between $8,000 and $9,000. Maijala explained that sometimes he has to adjust payment to suppliers in order to pay his hydro bill.

“Sometimes we have to lay people off or cut hours on people,” he added. “They have families too and they need to pay their bills. I would like to be able to help my staff keep their hours and keep their quality of life.”

Brown said that if elected, the first thing he would do to get hydro rates under control is stop the sale of Hydro One.

“The fire sale of hydro one is foolish,” he said. “It’s one time money that the government is using for their budget today and it’s going to permanently hurt Ontario in the future. We are losing a $700-million revenue tool.”

Brown added that the Ontario government continues to sign contracts for renewable energy that the province does not need, such as wind turbines.

“It’s one thing if you needed the generation, we don’t,” he said. “In the last two years, we’ve given away $3.5 billion in power. We are signing contracts and giving those contracts away for pennies on the dollar to Michigan, New York, and Quebec.”

According to Brown, the province could have purchased cheap hydro-electric power from Quebec or Manitoba for a fraction of the cost.
Maijala only learned of Brown’s visit the morning of, but he said that he has always wanted an explanation as to why hydro rates continue to climb upward.

“This has been a sore spot for me for years,” he said. “I’m hopeful that something will get done.”