District moving into Orange-Restrict means spectators won't be allowed, starting on Monday, until the area moves back to Yellow or Green.
Dec 5, 2020 11:00 AM By: Leith Dunick 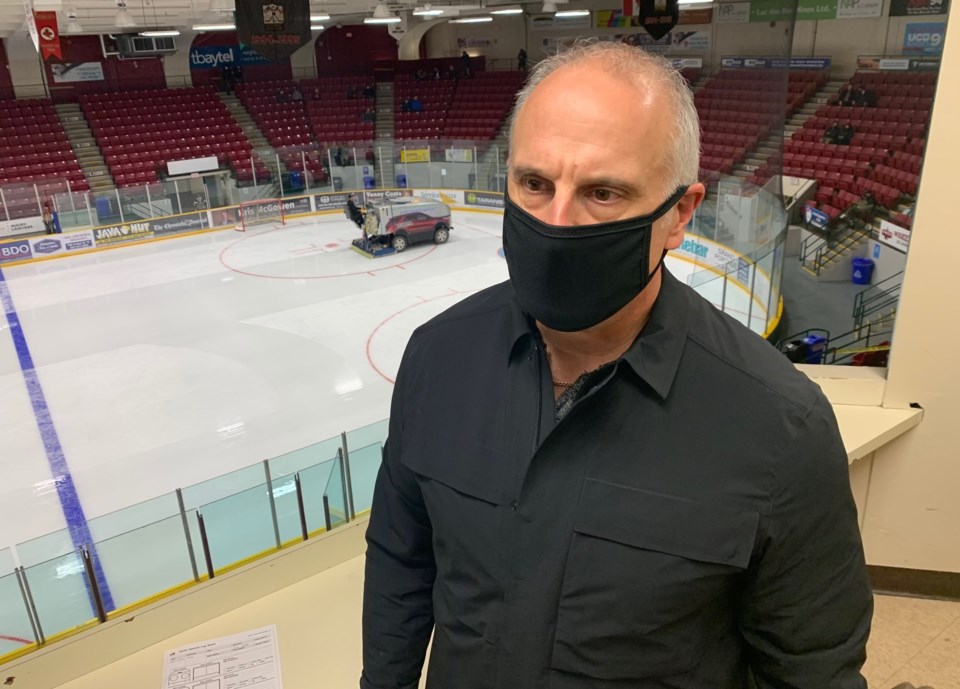 The Red Lake Miners, Dryden Ice Dogs and Fort Frances Lakers, if an opponent is found to up the league to six teams in 2020-21, are part of the North West Health Unit, which at present is still in the Yellow-Prevent zone and are still permitted to have up to 50 fans at games in their home communities.

“We've been told by the health unit that it doesn't change anything from an on-ice standpoint. We're still able to play in the manner that we have been proceeding so far. What we have been told is that it is going to affect the indoor gathering restrictions.”

Under the more restrictive Orange level of the province's COVID-19 framework, youth players will be allowed to have a parent or guardian in the hockey rink, but the rules don't extend to junior A, where players range in age from 16 to 21.

Nicholas said the new rules, which come into effect on Monday, are disappointing from a business standpoint, but with only 50 fans allowed in the stands, it won't be a make-or-break decision for either club.

“Every bit that gets clawed away, it just seems that it's tougher news that comes in front of us every time we turn around,” Nicholas said.

“They're never coming back and saying this is good news ... and this is going to make it easier. We'll re-evaluate what that is. At the end of the day, the gate receipts this year were not expected to be a very big part of our budget, so we may be able to recoup that other ways,” Nicholas said.

An option may be looking into whether or not the teams qualify for government assistance under COVID-19 relief plans.

They're also looking at ways to cut costs to make up for the revenue shortfall.

The North Stars returned to Fort William Gardens on Friday night, but the concession stands weren't open, another source of lost income, the team drawing a percentage of the sales of food and beverages.

“It's maybe not as bad as in other years, given that the teams are only playing 10 games. The North Stars are going to get two in here. Kam River has got two in as well. If nothing changes, they're looking at eight games without fans,” Nicholas said.

Thunder Bay coach Rob DeGagne said given what's going on in the country, with thousands of new cases being reported daily, the team is fortunate just to be able to play.

“It's paramount that we remember that there's a lot of people out there who can't even go out. We're lucky enough to be playing hockey,” DeGagne said. “It'll be interesting to see if it gets any worse. If it gets worse, I don't think we will be playing hockey.”

DeGagne said because players age out at 20 or 21,he felt it was important to give them a chance to finish out their junior career in some fashion, which is a big reason teams are working toward completing the 20 game season.

The Stars and Fighting Walleye wrap up pre-Christmas play on Saturday night and aren't expected to return to action until mid-January.