THUNDER BAY -- For the first time since she toppled the government, the leader of the New Democrats put a dollar figure to her party’s Ring of Fire commitment.
0
May 26, 2014 4:12 PM By: Matt Vis 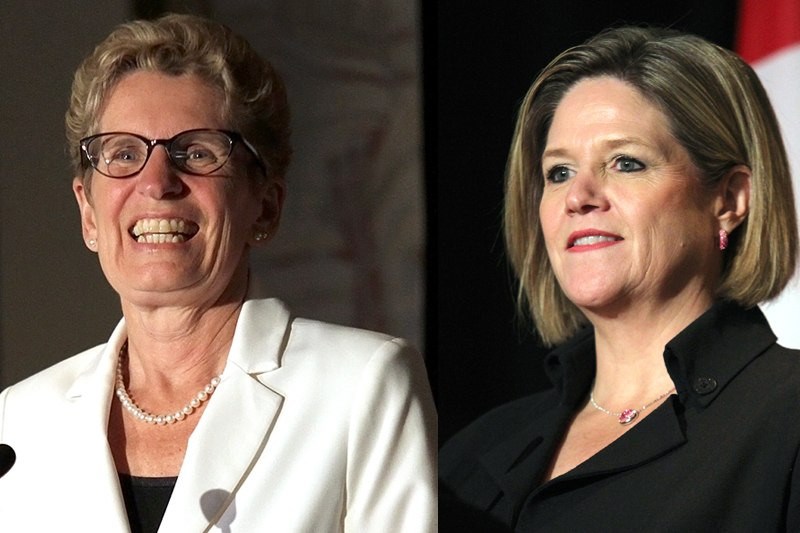 This is a photo illustration, two separate photos merged into one. Liberal Leader Kathleen Wynee appears on the left next to NDP leader Andrea Horwath. The two leaders faced on in the Northern Leader's Debate, which focused on Northern issues. PC leader Tim Hudak was unable to attend. (Leith Dunick, tbnewswatch.com)

THUNDER BAY -- For the first time since she toppled the government, the leader of the New Democrats put a dollar figure to her party’s Ring of Fire commitment.

In response to a question at Monday’s Northern Leaders Debate regarding funding to develop infrastructure for the lucrative mining project, NDP Leader Andrea Horwath said she would not only match the $1 billion promised by the Liberals but would provide more as necessary.

“The investment has to come right away,” she said while at her debate podium at the Valhalla Inn ballroom.

“New Democrats are committed not only to the $1 billion, but if it takes more than that $1 billion and we’re committed to that as well because the opportunity is magnificent for Northern Ontario communities and First Nations.”

Meanwhile, Liberal Leader Kathleen Wynne, in her platform unveiled over the weekend, said the $1 billion previously announced in the spring budget would be accessible immediately upon re-election.

It also included a pledge to create a development corporation, an entity that was first promised last fall, within 60 days of re-election.

Wynne said the timing of its imminent creation is not driven by trying to gain favour of voters but rather as a result of progress, such as the Regional Framework Agreement with the Matawa First Nations.

“The fact is we needed to have that framework agreement and (Minister of Northern Development and Mines and Thunder Bay-Superior North candidate) Michael Gravelle will tell you that was something that had to be in place to be able to open the door to allow the First Nations to work with us and I hope the federal government and businesses,” Wynne said.

When asked about whether she supports the development corporation, Horwath was non-committal.

“The first thing I would do is determine what it is, if anything, they have actually done in terms of a development corporation and take it from there,” Horwath said.

Horwath and the NDP had been tight lipped about funding for the Ring of Fire, with the leader dodging questions at a campaign stop as recently as the morning prior to the debate.

In a media follow-up after the debate Horwath said the funding was part of the party’s financial plan, but admitted she did not know how much money would be required.

The Liberals quickly fired back, sending a ‘fact check’ to media declaring that the NDP had never attributed a dollar figure to the Ring of Fire in its recently released election platform.

Both candidates stuck to their primary talking points throughout the duration of the debate, not straying off script or engaging the other in argument or dialogue.

For Horwath that meant firing at the Liberals with accusations of corruption, especially when it relates to the gas plant scandal.

For significant portions of the debate the NDP leader spent her attention attacking her counterpart, rather than providing specific, detailed solutions to the problems she identified.

Horwath set her path for the debate during her two-minute opening statement, spending the segment laying out why she believes the Liberal regime needs to be ousted, rather than an NDP government elected.

She referenced the gas plant scandal and tried to portray Wynne as the puppeteer.

After the debate, Wynne told local media that Horwath was just playing games to distract from the real Northern issues.

“She knows those allegations are not true,” Wynne said. “I think it’s quite a statement and a bit sad the leader of the NDP falls back on that when we were here to answer questions of Northern leaders.”

The shots at the Liberal leader continued with the beginning of the question period, with the first asking about plans to for energy supply in Northwestern Ontario.

Horwath said the Liberals twice broke election promises regarding the Thunder Bay Generating Station and converting it to natural gas. She accused the Liberals of not securing an adequate supply of biomass to run the plant throughout the winter.

She said the region needs solutions for now as well as the future.

“We need to make sure the biomass is enough to meet the needs of Northwestern Ontario, apparently the only thing the Liberals are committing to is enough to get you through the middle of January of next year and that’s not good enough,” Horwath said.

“In the longer term we need to look at the generating station, the generating capacity and the possibility of actually turning it into a gas fired plant.”

The leaders also faced questions asking them to identify strategies to balance the budget and reduce provincial debt, to create a skilled workforce, seek consultations with involved Northern stakeholders in the passing of new legislation and the impact of declining MPAC property values assessments on small communities.

Other than a brief swipe by Horwath, accusing absent PC leader Tim Hudak of not caring about the region, the PC’s lack of presence during the debate was rarely noticed.