THUNDER BAY -- The building that housed the Northern Woman’s Bookstore is being sold but members of its 31-year-old collective say women’s space is about so much more than the books.

Books were boxed for storage at Canada’s last women’s bookstore on Saturday but amid its empty shelves, its members vowed its legacy would continue.

Store co-founder Margaret Phillips passed away in November and while the collective maintained the store’s books and shelves, her estate’s managers are selling the Court Street building

Taina Maki Chahal has been a collective member since 2001. She said the store has been undergoing a transition over the past five years, increasing its focus on events and providing space for women to build political and social consciousness among women and allies.

“There’s no nostalgia in the sense that the bookstore has always been a progressive visionary space. It’s a feminist space and it has been inclusive of different women in their diversities and feminism in its diversities,” she said.

“The space is about what we do here so reimagining the Northern Woman’s Bookstore as another space or place has very little to do with nostalgia but how can we continue to crate a feminist, woman-friendly space on a grassroots, street level?” 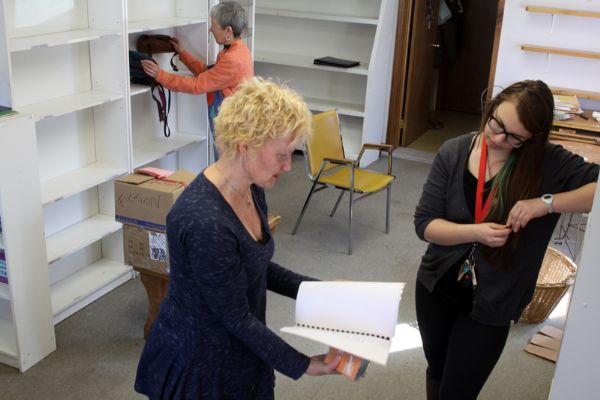 The answers will come from a young generation of diverse feminists who are evolving with Thunder Bay’s increasingly multicultural population, increased visibility of transgendered people and a growing focus on Indigenous-settler solidarity across movements.

“I think if feminism has taught us anything, there’s power when people come together with goals to better the community that you live in and better the lives of those around you,” said Stephanie Simko.

“It needs to be a space where you’re looking to educate people, first and foremost – to see how their values and their social experiences can lead them into political and advocacy work.”

A steep but encouraging learning curve awaits Simko and other young feminists over the next year as they learn the intricacies of operating a not-for-profit organization, fundraise, navigate grant applications and search for the space to fit the intersectional needs of a changing time.

“We could have easily gone online but we didn’t want to lose what the older generations of feminism started for us which was sitting down together and being together,” said Takwana Nhau.

“Things like depression are made worse by lonelinenss and just being isolated. We’re trying not to fall into that trap we’re forced to go into because of the way the economic system works.

"You work a lot just to keep up with rent and student loan payments so that leaves you in your work space and you don't have time to socialize and to share and to feel better if you're going through something. Space necessarily allows us to come together. ”