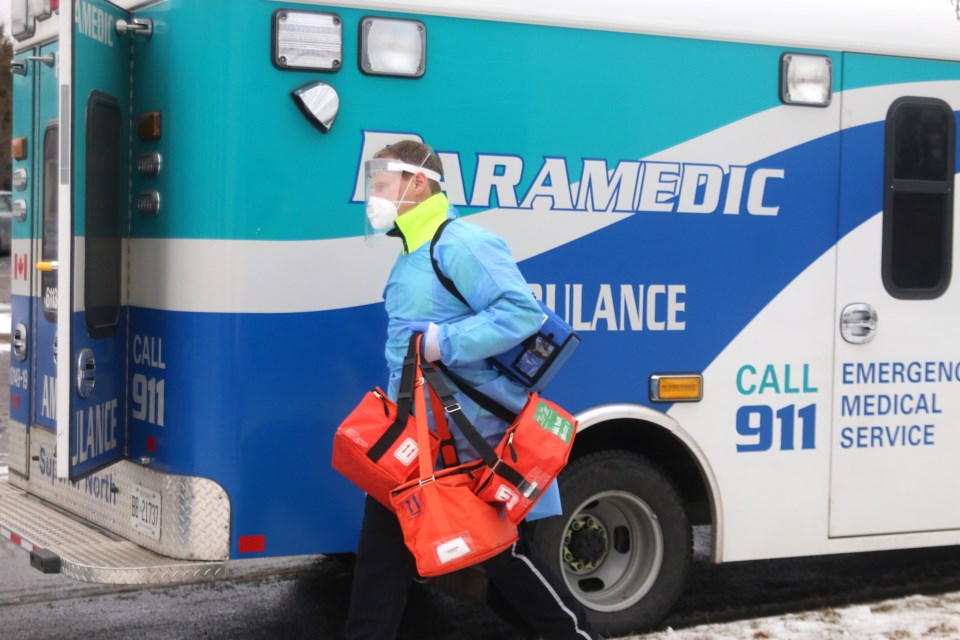 Superior North EMS paramedics will be in legal strike position as of midnight on Saturday. (Doug Diaczuk, tbnewswatch.com/FILE)

THUNDER BAY – The union representing Superior North EMS paramedics in the City of Thunder Bay says a demand to cover managerial work is the major stumbling block to an agreement with the city.

In a statement by Unifor issued Saturday morning, Rob Moquin, unit chair of Local 39-11, said the two sides were approaching agreement on most other issues.

"Our bargaining committee believes that an agreement is within reach but city negotiators are refusing to drop a demand for frontline paramedics to cover supervisor managerial work, taking them away from patient duties and leaving citizens vulnerable with fewer available ambulances," he said.

Friday was the last day of scheduled bargaining that began in December, and neither party had yet reached out to initiate additional bargaining as of mid-Saturday morning ahead of a looming midnight strike deadline, he said over the phone.

However, he expressed confidence that an agreement could be reached if the impasse over what Unifor called managerial duties were resolved.

“I think if we can move beyond the managerial issue, I feel quite confident we could move toward an agreement fairly quickly,” Moquin said.

A group of 108 city paramedics voted 99 per cent in support of strike action several weeks ago, Moquin reported (paramedics working in the remainder of the district served by Superior North EMS are represented separately).

They have been without a contract for around a year, after agreeing to defer renegotiation due to COVID-19.

An essential services agreement signed with the city will ensure EMS services continue, but will limit the number of ambulances and staff available at any given time. Non-urgent transfers may be deferred or not serviced depending on busyness levels.

“The strike could last as long as any other strike in any other industry or service,” Moquin said in March. “And we could be legislated back to work sooner than later. But there would be a significant decrease of ambulances responding to emergencies in the city.”